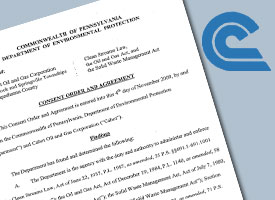 After a year of chemical spills, water well contamination and an explosion caused by leaking underground methane, Cabot Oil and Gas Corp. has been fined $120,000 and ordered to abide by a set of stricter-than-usual probationary regulations if it wants to continue its vast natural gas drilling operation in Pennsylvania.

The judgment is the latest chapter in a saga of drilling controversy and environmental contamination as a result of drilling for natural gas in northeastern Pennsylvania that we’ve been following since January, and is part of our ongoing investigation into the environmental consequences of gas drilling across the country.

The charges and conditions against Cabot were outlined by the Pennsylvania Department of Environmental Protection in a 23-page document that lists each of Cabot’s offenses – from failure to properly cement wells to failure to maintain and submit proper records – and asks the company to acknowledge and address the findings. The fine is the largest issued by the Pennsylvania agency to a gas company.

Cabot signed the order Wednesday agreeing to the state’s conditions, but seemed to stop short of taking full responsibility. “The department made several findings, and we agreed with the basic facts as they were laid out,” said a Cabot spokesman, Ken Komoroski. “But Cabot did not agree to the legal conclusions of violations of laws and regulations.”

The DEP began investigating Cabot early this year, after residents in Dimock, Pa., started reporting methane bubbling out of their faucets – a sign that natural gas had contaminated their water supplies. Investigators found that some of Cabot’s well casings, which seal well pipes from water supplies, were faulty and had allowed natural gas to migrate into the groundwater.

The groundwater incidents were the first of several spills and accidents that followed. In at least two cases the company spilled diesel or drilling fluids that reached water supplies. And in September, the DEP ordered Cabot to stop its hydraulic fracturing operations in Susquehanna County after it allowed three hydraulic fracturing fluid spills in nine days. The ban was lifted on Oct. 16, after the company revised its pollution prevention and control plan.

Now the company has until March 31 to comply with parts of the DEP’s order and submit a plan outlining how it will permanently replace the water supplies for more than a dozen affected homes near the town of Dimock.

The most important requirements have to do with well construction. Cabot will have to submit well casing and cementing plans to the DEP, which will have to approve the well before Cabot can proceed with drilling or any hydraulic fracturing. The company will also have to submit a plan that specifically lays out how it will prove the integrity of the casing and cementing on existing wells and fix any that are defective. If the defective casing isn’t fixed by the March deadline, Cabot will be ordered to plug its defective wells.

“They’ve got to go back and fix all of those wells,” said DEP spokeswoman Teresa Candori.

Finally, the company will be required to tell the DEP who has contacted the company with concerns about the quantity or quality of their water supplies.

“It does add some additional requirements beyond the regulations but these are measures and procedures that Cabot agrees are appropriate for the area,” Cabot spokesman Komoroski said.