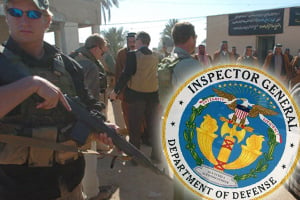 The Defense Department's inspector general is preparing a possible audit to examine allegations that inadequate oversight by federal officials allowed AIG and other major carriers to deny medical benefits due civilian contractors in Iraq and Afghanistan.

The examination, undertaken in response to a request (PDF) by Sen. Bernie Sanders (I-VT), comes after a joint investigation by the Los Angeles Times, ABC News and ProPublica found that AIG and other carriers denied nearly half of claims for serious injuries to contractors working overseas.

"We are currently examining the information provided in your correspondence," wrote John R. Crane, the assistant inspector general, in a letter to Sanders earlier this month (PDF). "We will provide you the results of that examination and our course of action in the matter as soon as possible."

IG officials met with Senate staff last week to hammer out details of the proposed audit, according to people familiar with the matter. "We're in the preliminary stages. It's fact-finding stuff," said an IG official, who requested anonymity to speak freely.

At issue is a federally mandated system that requires government contractors to purchase workers' compensation insurance for overseas civilians. AIG is the largest provider of such insurance, which is required under a World War II-era law known as the Defense Base Act. Taxpayers pay premiums for the insurance, which is included in the price of federal contracts.

So far, AIG and three other carriers have earned more than $1.5 billion in premiums while paying out only about $900 million in benefits, according to a congressional report (PDF) last year -- a far higher profit margin than workers' compensation programs in the United States. AIG declined to comment.

One of the problems with the system, the joint investigation found, is that no single agency is responsible for overseeing it. The Labor Department administers payments made to contractors, but the Defense Department pays most of the premiums.

The IG's office joins the Senate Health, Education, Labor and Pensions Committee and a panel of the House Committee on Government and Oversight Reform in looking into the overall program. Earlier this month, the IG issued a report (PDF) that found that military medical facilities were failing to recoup millions of dollars in costs from AIG and other carriers for care provided to injured contractors. So far, more than 1,400 contractors have died in Iraq, and another 31,000 have been injured.

A Hill staffer who has followed the issue said several agencies have indicated that the system has serious flaws. The Government Accountabilty Office (PDF) and the Congressional Research Service (PDF) have criticized the system, which has gone largely unchanged since the 1940s. "Everybody says this is broken," the staffer said. "We need major changes to fix this."