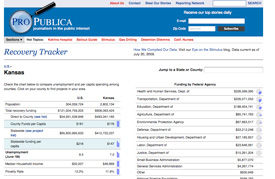 Hillcrest Rural Schools in north-central Kansas is set to get nearly $7,000 in federal stimulus money to help its disadvantaged students. Only one glitch: The district doesn’t exist anymore. It closed in 2006 when it was merged into another nearby district.

Hillcrest was one of nearly 14,000 school districts or local education agencies nationwide that the U.S. Department of Education reported would get stimulus funds under its Title I program.

But some of those districts are phantoms because they were dissolved or merged.

In Kansas, 11 school districts that no longer exist are on the U.S. Department of Education’s distribution list for stimulus funds. They are set to receive nearly $600,000.

We found these school districts when Kirby Ross, managing editor of the Phillips County Review in Phillipsburg, Kan., alerted us that our county-by-county stimulus tracker included two districts in his area that didn’t exist. That prompted us to do some more digging.

We checked more states and found that other consolidated or dissolved districts were on the list. In Missouri and Iowa, a handful of closed districts were listed as receiving stimulus funding.

That doesn’t mean stimulus checks will be arriving to empty buildings. In instances where money is allocated to a closed district, it typically is divvied up among the districts where the students now attend.

We’ll update our data once states know how the funds will be redistributed. In the meantime, if you browse our list and notice money going to closed districts in your area, please let us know.