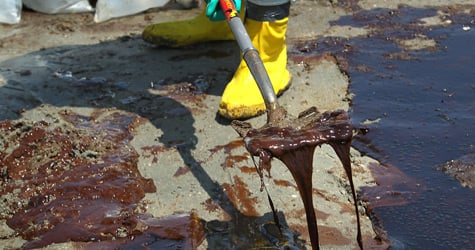 With its one-month anniversary passed, the Gulf oil spill has reached the shoreline, and it isn't pretty. Today's photo depicts the onshore efforts of a BP cleanup crew as it took shovels and garbage bags to the shores of Port Fourchon, La. BP CEO Tony Hayward visited the beach on Monday with reporters in tow and said BP was committed to cleaning up "every last drop." But with 32 national wildlife refuges at risk of being affected by the BP oil spill, officials from Texas to Florida are worried that cleanup, if possible, may come too late.

Check out our slideshow of photos from the Gulf oil spill, which we update daily.