When it comes to politics, there’s nowhere like Illinois. Throughout the election season, ProPublica Illinois reporter and political junkie Mick Dumke will analyze the state’s political issues and personalities in this occasional column.

Republican governor hopeful Jeanne Ives was on her way to a recent campaign stop in the northwest suburbs when she got a call from one of her five kids. There was a problem: After promising to drop off his lunch at school, she’d forgotten all about it.

“These are things Bruce Rauner does not worry about — I assure you,” said Ives, a state representative from Wheaton, as she hung up the phone.

No matter the issue — even if it’s a teenager’s forgotten sandwich — Ives never misses the chance to highlight her central campaign theme: While she represents and stands up for middle-class families, Rauner, the millionaire incumbent governor, has repeatedly sold them out.

It doesn’t matter that Rauner has spent much of his first term blasting the state’s Democratic leadership and pushing to restrict union power — attacks urged on by the right. Ives is now the candidate of choice for a network of top conservatives, many of them former Rauner supporters, who believe he has turned out to be liberal, weak and dishonest.

The odds of Ives winning the Republican nomination seem long. In a left-leaning state, Rauner is more centrist than Ives, and certainly better funded — his campaign has collected $82 million in donations since 2015, including more than $57 million from the governor himself. That dwarfs the $3.7 million total received by Ives’ campaign funds.

But even if Ives loses, her campaign will have continued conservatives’ long crusade to push Illinois politics to the right. According to that narrative, the state is suffering because Democrats and go-along Republicans squander money on the undocumented, the undeserving and themselves. The more often conservatives tell the story, the more they can hope it’s accepted by the mainstream. Ives is the most recent vehicle for that message.

Ready to Dive Into More Politics?

You can join Mick Dumke of ProPublica Illinois and Ben Joravsky of the Chicago Reader this evening — or the first Tuesday of any month — for the appropriately named First Tuesdays, their live talk show at The Hideout (1354 W. Wabansia Ave. in Chicago).

In Republican circles, “anyone who knows, who pays a lick of attention to state government, supports Jeanne — pro-life people, budget [watchdog] people,” said Brian Timpone, a business owner and conservative activist who donated $10,000 to Ives’ campaign. “In the event she loses, we’ll have two Democrats running for governor.”

Ives calls herself a “proud” conservative, and neither her backers nor her critics disagree. But while her admirers say the West Point grad is smart, principled and tough, she was widely condemned after she described same-sex marriage as “disordered.”

Her mission in politics, Ives often says, is to look out for taxpayers. She said she voted for Rauner in 2014 because he said that was his goal, too. Instead, she said, Rauner was outmaneuvered by House Speaker Michael Madigan and has failed to deliver on promises to confront the state’s deep fiscal problems.

But her break with Rauner didn’t come until he signed two Democrat-authored bills last year that infuriated social conservatives: one that restricts cooperation between state officials and federal immigration authorities, the other broadening access to abortion, including for some public aid recipients. Ives and other Rauner critics say he promised to veto the abortion bill and then flip-flopped.

Ives has used those issues to fire up the Republican base’s conservative wing, which backers say she needs in a primary. She has criticized Rauner for failing to embrace President Donald Trump. And, in February, she generated outrage when her campaign aired an ad featuring actors who “thank” Rauner for paying for abortions, protecting “illegal immigrant criminals” and allowing a transgender person — played by a large man in a dress — into girls’ bathrooms.

Ives won’t say who wrote the ad, calling it a “group effort.” But she stands by its message.

The ad illustrates more than the direction of her campaign. It showed Ives had plenty of money to air it because she had the support of many of the state’s top conservative donors and operatives — many of whom, like her, had previously backed Rauner.

The “thank you” ad was released just days after Ives’ campaign reported two donations totalling $2.5 million from Richard Uihlein, the Lake Forest businessman who is a frequent donor to conservative causes around the country, including organizations led by the right-wing billionaire brothers David and Charles Koch. Once upon a time — during the last election cycle — he gave $2.6 million to Rauner. 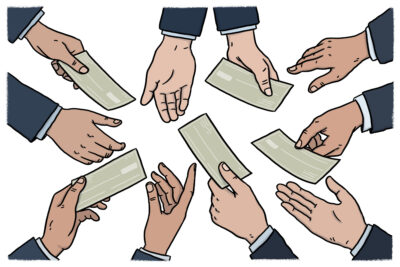 Uihlein is one of the leading financial supporters of the Illinois Policy Institute, the influential nonprofit think tank that for years has led an attack on government spending, regulations and union rights. He has also contributed more than $12 million to the Liberty Principles super PAC, which is run by Dan Proft, a senior fellow at the institute who said he’s currently on leave to focus on political work. Proft said he is an unpaid adviser to Ives.

Many other conservatives with connections to the institute have also contributed to the Ives campaign. They include John Tillman, the CEO of the institute, who gave $5,000 in February. Elizabeth Weiss, who gave Ives $25,000, is married to investment manager Dick Weiss, an institute board member.

Ives has also been backed by Illinois Liberty, another political action committee formed and run by leaders of the institute. The committee donated $10,000 to an Ives campaign fund in October, shortly before she launched her run for governor.

In an email, Proft didn’t respond to questions about his specific role in Ives’ campaign, or whether he had helped line up donors for it. Proft said it shouldn’t be a surprise that the donors who contribute to his PAC would rally behind “a conservative reform candidate for governor against a traitor like Rauner.”

Though they work together “tightly,” Ives said Tillman, Proft and other leaders of the institute did not recruit her to the race. “Obviously they don’t work for me, at all, but when we can help each other on a policy solution, we do,” she said.

But Ives said they are not in lockstep, noting that she opposed a school-funding bill last year though Proft pressed for her support because it provides tax credits for private schools. She thought it was a bad deal for taxpayers.

No matter what happens in the primary, the conservative battle to pull the Republican Party to the right — and the state with it — will not end with Ives, just as it hasn’t ended with Rauner. You can put your money on that — just as the crusade’s wealthy backers have.