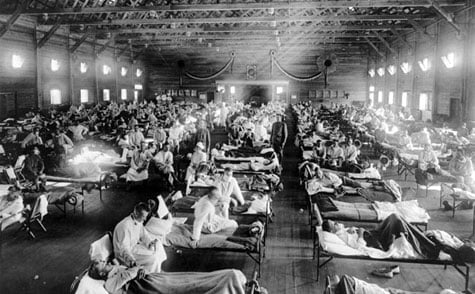 This story was co-published with the New York Times.

A 32-year-old man with cystic fibrosis is rushed to the hospital with appendicitis in the midst of a worsening pandemic caused by the H1N1 flu virus, which has mutated into a more deadly form. The man is awaiting a lung transplant and brought with him the mechanical ventilator that helps him breathe.

New York’s governor has declared a state of emergency and hospitals are following the state’s pandemic ventilator allocation plan -- actual guidelines drafted in 2007 that are now being revisited. The plan aims to direct ventilators to those with the best chances of survival in a severe, 1918-like flu pandemic where tens of thousands develop life-threatening pneumonia.

Because the man’s end-stage lung disease caused by his cystic fibrosis is among a list of medical conditions associated with high mortality, the guidelines would bar the man from using a ventilator in a hospital, even though he is, unlike many with his illness, stable, in good condition, and not close to death. If the hospital admits him, the guidelines call for the machine that keeps him alive to be given to someone else.

Would doctors and nurses follow such rules? Should they?

In recent years, officials in a host of states and localities, as well as the federal Veterans Health Administration, have been quietly addressing one of medicine’s most troubling questions: Who should get a chance to survive when the number of severely ill people far exceeds the resources needed to treat them all?

The draft plans vary. In some states, patients with Do Not Resuscitate orders, the elderly, those requiring dialysis, or those with severe neurological impairment would be refused ventilators, or admission to hospitals. Utah divides epidemics into phases. Initially, hospitals would apply triage rules to residents of mental institutions, nursing homes, prisons and facilities for the “handicapped.” If an epidemic worsened, the rules would apply to the general population.

Federal officials say the possibility that America’s already crowded intensive care units would be overwhelmed in the coming weeks by flu patients is small but they remain vigilant.

The triage plans have attracted little publicity. New York, for example, released its draft guidelines in 2007, offered a 45-day comment period, and has made no changes since. The Health Department made 90 pages of public comments public this week only after receiving a request under the state’s public records laws.

Mary Buckley-Davis, a respiratory therapist with 30 years experience, wrote to officials in 2007 that “there will be rioting in the streets” if hospitals begin disconnecting ventilators. “There won’t be enough public relations spin or appropriate media coverage in the world” to calm the family of a patient “terminally weaned” from a ventilator, she said.

State and federal officials defend formal rationing as the last in a series of steps that would be taken to stretch scarce resources and provide the best outcome for the public. They say it is better to plan for such decisions than leave them to besieged health workers battling a crisis.

But some health professionals question whether the draft guidelines are fair, effective, ethical, and even remotely feasible.

Most existing triage plans were designed for handling mass casualties. They sort injured victims into priority categories based on the urgency of their medical needs and their potential for survival given available resources. Much of the controversy over the state plans focuses on two additional features.

These are “exclusion criteria,” which bar certain categories of patients from standard hospital treatments in a severe health disaster, and “minimum qualifications for survival,” which limit the resources used for each patient. Once that limit is reached, patients who are not improving would be removed from essential treatment in favor of those with better chances.

A version of these concepts was outlined in a post-9/11 medical journal article that suggested ways to handle victims of a large-scale bioterrorist event. The author, Dr. Frederick Burkle Jr., said he based his ideas in part on his experiences as a triage officer in Vietnam and the gulf war and on a cold war-era British plan for coping with a nuclear strike. Dr. Burkle said that during the gulf war he once instructed surgeons to halt an operation and work on another patient who was more likely to survive. Surgeons later returned to the first patient.

Dr. Burkle’s ideas were key aspects of guidelines Ontario authorities drew up after SARS to plan for avian flu and other pandemics. This approach and one by a team of Minnesota doctors were modified by groups developing similar guidelines in the United States.

There were important distinctions. Dr. Burkle’s original paper did not anticipate withdrawing care from patients and stressed the need to reassess the level of supplies “sometimes on a daily or hourly basis” in a fluid effort to provide the best possible care.

Some states’ triage guidelines are rigid, with a single set of criteria intended to apply throughout the severe phase of a pandemic. That disturbs Dr. Burkle. “I have said to my wife, I think I developed a monster here,” he said.

Recent research highlights the problem of a one-size-fits-all approach to triage. Many state pandemic plans call for hospitals to remove patients from ventilators if they are not improving after two to five days. Studies show that people severely ill with H1N1 flu generally need a week to two weeks on ventilators to recover.

There is also controversy over what values and ethical principles should guide triage decisions, how to engage the public, and whether withdrawing life support in the hospital and withholding it at the hospital door are distinct.

Normally, removing viable patients from life support against their or their families’ will would be considered murder. The New York-Presbyterian Hospital employees who participated in the recent exercise said they would not comply unless given legal protection.

They also never figured out what to do with that hypothetical patient who had his own ventilator, said Dr. Kenneth Prager, a pulmonologist and ethicist. “The issue of removing patients from ventilators,” he said, “was so overwhelming that it precluded discussion of further case scenarios.”