Democrats in both the House and Senate have introduced legislation to force the Department of Veterans Affairs to overturn a ban on veteran voter registration drives at its facilities. Separately, Connecticut's secretary of state is still contemplating a lawsuit.

It's the latest move in an ongoing struggle between Dems and VA leadership. In response to a March letter from Sens. Diane Feinstein (D-CA) and John Kerry (D-MA) seeking to make all VA facilities voter registration locations under the National Voter Registration Act, the VA issued a directive in May that prohibited voter registration drives because of the potential for Hatch Act violations, which prohibits federal employees from partaking in partisan political activities while on the job. As we reported last month, experts are dubious of the VA’s Hatch Act concerns.

Last Friday, the House of Representatives passed a VA appropriations bill that included an amendment by Rep. Christopher Murphy (D-CT) to reverse the ban.

Rep. Robert Brady (D-PA) also introduced a bill last week called the Veteran Voting Support Act that would overturn the ban by permitting states to designate VA facilities as voter registration agencies –- like many states do with their Department of Motor Vehicles. The bill mirrors a Senate versionintroduced on July 22 and was co-sponsored by several senators, including Democratic presidential candidate Sen. Barack Obama. We called Republican presidential candidate Sen. John McCain’s office this morning to gauge his support for the bill, but haven’t heard back yet. The earliest any of these bills could progress is Sept. 8, when Congress returns from its recess.

In an e-mail response, VA spokesman Terry Jemison wrote, "Our position has not changed in light of any of these bills." 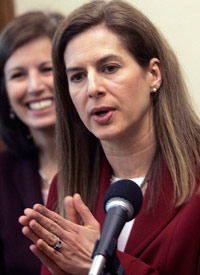 On the state level, Connecticut Secretary of State Susan Bysiewicz exchanged letters with the state’s VA director Roger Johnson last week, continuing a dialogue that began after the VA blocked her from registering veterans at its hospital in West Haven, Conn. Bysiewicz initially said she might sue the VA to gain access and hasn’t backed off that.

"The lawyers are all talking about it," Bysiewicz spokesman Av Harris told ProPublica.

In his letter (PDF) on July 29, Johnson wrote that the VA had posted voter information flyers, made registration forms available and recently contacted every inpatient and resident in the Connecticut system to see if they needed assistance.

"We appreciate some of the concessions," Harris told us. "But let’s get back in there now and register and educate these people to vote."

Johnson also wrote that Bysiewicz could help the VA canvas veterans up to three weeks before the Nov. 4 election and offer training to VA volunteers.

"All in-patients, they are given a handout on voter information," Connecticut VA spokesperson Pamela Redmond told us. "There are flyers with voter information throughout the facility. We’ve complied with the directive."

But Bysiewicz responded in a letter (PDF) last Friday that she was concerned about the upcoming registration deadline for municipal elections. She also wanted to demonstrate how Connecticut’s new optical scan voting machines work, but Johnson denied that request in his letter.

“The main sticking point is they keep putting conditions on us going in there,” Harris told us. “It’s all this bureaucratic gobbly-gook.”