Not long ago, we announced that we will be collaborating with Free Street Theater to travel across the state and conduct performance-inspired workshops to learn what people care about, and how people see themselves in relation to news and media about their communities. We’re documenting how this experimental project takes shape so you can follow along with us.

We put out a call asking for input and invitations on where in Illinois we should go. Now, we’re pleased to let you know that one of our project’s stops will be Toulon, Illinois. In case you’re not familiar with Toulon, it’s a town of 1,245 people in Stark County, northwest of Peoria. We’re partnering with James Nowlan of the Stark County News, a weekly newspaper with 1,200 subscribers. Nowlan, the newspaper’s publisher, said he hopes the forum will allow his town to talk about hopes and fears that usually go unspoken. The area has changed a lot since he grew up there, he said, and it has left a lot of people worried about the future of rural, farm-oriented towns like Toulon.

“In the ‘50s, there were four grocery stories, four car dealers, two or three doctors, a couple of dentists and so on,” he said. “Now, there’s almost none of that. We have the bank, a little country diner and a tiny grocery store and a bakery and just a few services like that in the county. And this is typical, not atypical.”

Nowlan has been publishing the countywide newspaper since he moved back to Toulon in the late 1990s, but his history with the paper and town goes back much further. His grandfather owned the Stark County News from 1897 until his death in 1941, when Nowlan’s father took over. The paper went out of business in 1984, but he restarted it in 2002. Nowlan thought it served an important purpose in his county: keeping people informed about everything from birthdays to local government meetings.

Nowlan calls Toulon a typical Midwestern small town. He chalks up his town’s “conservative and dour” character to the teetotaling English and Scots who first moved there in the 1840s. Toulon hasn’t seen a lot of racial change since it was first founded — 98.8 percent of the town is white — but the town has become a lot poorer since Nowlan was a boy, he said.

Housing prices have sunk as the county’s population has declined, and Nowlan said some low-income families from nearby metropolitan areas like Peoria have moved into Toulon for the lower cost of living. The downside? The town doesn’t offer many jobs, apart from the schools and the local nursing home, and there isn’t a lot to do, Nowlan said. And if the county’s population shrinks even further, he said, there might not be enough funding or children left to fill local schools; the Stark County School District has lost 17.6 percent of its enrollment over the past decade.

“Schools are considered by many rural folks to be the centerpiece of their community,” Nowlan said. “If the school is gone, what rationale is there for the community?”

Read More About This Project 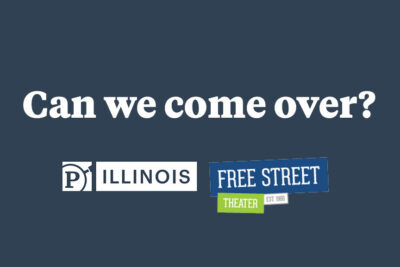 Although Cook County’s population is much larger than Stark County’s, Nowlan said the topics that people care about are probably similar: a lack of jobs, deteriorating schools, the high costs of health care and public safety. He dismisses any notions of one place being better than the other, though. “We think of small towns as being safe, maybe safer than what we think of in Chicago,” he said. “But on the other hand, we had a triple murder in my town in 2002.”

The Toulon community forum will take place in the News Room Bistro, located in the building that houses the Stark County News’ offices. Nowlan said he hopes that his community will feel comfortable discussing issues that residents don’t often talk about for fear of offending their neighbors.

“Maybe the discussion will lead to something. Maybe people will say, ‘Hey, this is a problem and we need to do something about it.’ Maybe a committee is formed. Maybe an initiative is started,” Nowlan said. “At the moment, I don’t think there are many settings for public discussion. I think public discussion is a very positive thing in today’s world.”

We’ll keep you posted on when we’ll be in Toulon, and also let you know soon about a few other locations around the state we’ll be visiting. Until then, be sure to follow us on Facebook and Twitter, and if you have ideas for stories or something we should be investigating where you live, we’re all ears. Here’s our email address: [email protected].