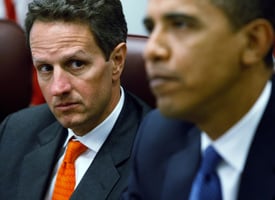 Treasury Secretary nominee Timothy Geithner is sitting before the Senate Finance Committee today for what some predict will be a genteel confirmation hearing. Most of the lead-up coverage has focused on Geithner’s past tax delinquencies. But there’s another, larger issue that senators might want to explore: Geithner’s past supervision of Citigroup, the megabank with a colossal government bailout.

Geithner has been president of the Federal Reserve Bank of New York since 2003 and thus had oversight of Citigroup’s parent company. Yet during that time, as we reported, Citigroup pursued an aggressive acquisition strategy, and a headlong plunge into subprime mortgage securities put the financial giant at risk.

Ordinary taxpayers would like an answer to this question: Why have they been billed more than $45 billion to rescue Citigroup from failure when, as president of the Federal Reserve Bank of New York, you were its primary supervisor? Three major problems led to Citigroup’s downfall: bad investment policy; overexpansion, which overwhelmed Citigroup’s management; and an inadequate capital base. Why was Citigroup’s supervision inadequate to deal with these problems?

Here’s where you can watch the hearing, which is going on now.