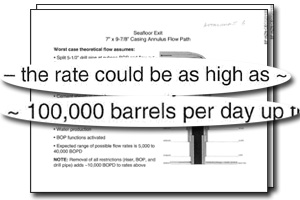 Rep. Ed Markey has been among BP's toughest critics in Congress following the Deepwater Horizon blowout, accusing it, among other things, of lowballing its estimates of oil flow.

On Sunday, Markey was at it again. As you may have read, the Boston Democrat released an internal BP document that shows that early company estimates for worst-case oil flow scenarios were far higher than the company has ever acknowledged -- up to 100,000 barrels per day if all containment mechanisms were to fail. Take a look at the document for yourself.

The 100,000-barrels-per-day scenario contrasts sharply with the company’s public pronouncements at the time.

“I think those estimates of 70,000, with due respect to the experts, don't match the many, many experts and scientists that are involved in this in a unified way," Bob Dudley, BP’s managing director and the newly anointed chief of the company’s spill response, said on MSNBC on May 14. "It's not just a BP estimate ... 70,000 feels like a little exaggeration, a little scare-mongering."