On Friday, President Donald Trump issued an executive order barring refugees and immigrants from seven majority Muslim countries from entering the country for 120 days. In the hours that followed, chaos erupted across the country as confused travelers from Iraq, Iran, Syria, Sudan, Libya, Somalia and Yemen were detained in airports or sent back to their departure countries. Many were separated from their families. Protests followed, and so did several lawsuits.

Since then, we’ve gotten several questions from readers about the power the president has to affect immigration policy and the historical context surrounding this executive order. We’ve taken those questions to several immigration experts, and we’ll attempt to answer some of them here.

What gives the power to issue executive orders on immigration?

But, as Gerald Neuman — law professor and co-director of the Human Rights Program at Harvard Law School — points out, that’s just one piece of the puzzle. The Immigration and Nationality Act has been updated since then, and the courts have long held that the Constitution applies to immigration matters, including the Establishment Clause (which prevents discrimination on the basis of religion) and the Equal Protection Clause (which guarantees the equal protection of law to all).

So, what are those limitations, and could Trump’s executive order violate them?

A popular argument, most notably in this widely shared New York Times op-ed piece by David Bier, is that the broad authority granted the president by the 1952 Immigration and Nationality Act was significantly limited by the 1965 revision of the law, which barred any discrimination “in the issuance of an immigrant visa because of the person’s race, sex, nationality, place of birth or place of residence.” Bier, an immigration policy analyst at the libertarian-leaning Cato Institute, reads this clause to mean that the Trump executive order is in clear violation of the law.

Are you from Iraq, Iran, Syria, Yemen, Sudan, Libya or Somalia? We want to hear from you if President Trump’s travel ban is impacting your life. You can email us at [email protected] to share your story.

“Mr. Trump may want to revive discrimination based on national origin by asserting a distinction between ‘the issuance of a visa’ and the ‘entry’ of the immigrant. But this is nonsense. Immigrants cannot legally be issued a visa if they are barred from entry. Thus, all orders under the 1952 law apply equally to entry and visa issuance, as his executive order acknowledges,” Bier wrote.

Some scholars argue the president’s order also violates the Constitution. In weighing that question, “it’s helpful to view the order in the context of the history that led up to it,” said Neuman, the Harvard Law School professor. “What the president said about the policies he wanted to adopt before the fact; the fact that there is no new emergency or change of circumstances that require such a change; the fact that procedures by which this were adopted were not the normal procedures by which executive orders are adopted; and the enormous contrast in magnitude between the number of people who are affected by this change and the size of the problem it’s allegedly dealing with.”

It is true that Trump repeatedly called for a “Muslim ban” on the campaign trail. It is also true the Trump confidante and adviser Rudy Giuliani claimed on Fox News that Trump asked him to devise a “Muslim ban” but to show him “the right way to do it legally.” But, said Cox, even with these factors it is still often very difficult to convince a court that a presidential order drafted to be neutral on its face is tainted by the thoughts or intent of its authors. “I think it is just historically true that that's a tough thing to show,” he said. But, he added, if a litigant could convince a court this was the case, they’d have “a fighting chance” at undoing the order.

But, Obama did something like this in 2011 right? Not really, say experts.

Trump has repeatedly claimed that his ban is “similar to what President Obama did in 2011 when he banned visas for refugees from Iraq for six months.” But this is not an accurate depiction of Obama’s 2011 action. 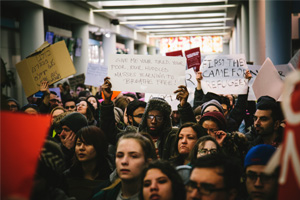 The executive order banning travel from seven predominantly Muslim nations is separating families who made every effort to follow U.S. immigration law. Read the story.

Cleveland Clinic Medical Trainee Sues to Come Back to U.S.

Dr. Suha Abushamma was denied entry to this country Saturday, hours after President Trump signed an executive order temporarily banning visitors from seven countries. Her plane out of the country took off as a judge was issuing an order blocking the government from removing people like her. Read the story.

And as Jon Finer points out in an article in Foreign Policy, Obama’s action was “grounded in a specific threat,” while Trump’s is not. Finer was the chief of staff and director of policy planning for Secretary John Kerry at the U.S. Department of State. He writes that the measure was taken after two Iraqi refugees were arrested in Kentucky under terrorism-related charges (they remain the only two to be arrested for this reason).

Eleanor Acer, the senior director of refugee protection at Human Rights First said at no point did Obama’s executive order ban or suspend the settlement of refugees from Iraq, though resettlement did slow down during this time while additional security screening was imposed. One step, she said, was an additional security check immediately prior to departure for the U.S., “to make sure that no recent derogatory information had been added to the vast array of other intelligence and law enforcement databases consulted, in the time since the prior security clearance check had been conducted.”

Trump’s order, on the other hand, “shuts down all resettlement — including for Iraqis given priority access to resettlement due to their U.S. ties — for 4 months, which will have a devastating impact on the resettlement of this population,” said Acer. “Their resettlement will not only be delayed for 4 months, but given the complex multi-step process of resettlement, the resulting delays will be much longer.”

This will also be the case for the six other countries that are part of Trump’s executive order. Finer notes that while Obama’s order applied only to refugees and holders of Special Immigrant Visas from a single country, Trump’s order “applies to seven countries with total population more than 130 million, and to virtually every category of immigrant other than diplomats, including tourists and business travelers.”