One key reason the Gulf oil spill has been so hard to stop is that BP was drilling so deep. Such deepwater drilling has been increasingly common -- but both BP and regulators seem to have been unprepared for the complications that can crop up.

At 5,000 feet, the BP's ruptured well continues to gush oil into the Gulf of Mexico. Efforts to temporarily stanch the flow of oil with a containment dome have so far failed, largely because of complications presented by the depth. (Also, BP -- rather than having the device on hand -- built the dome only after the accident.)

With the failure of the dome and with oil encroaching on shorelines, USA Today reports BP "has not decided yet how to proceed."

"There's a lot of techniques available to us," said BP's chief operating officer Doug Suttles on this morning's "Today" show. "The challenge with all of them is, as you said, they haven't been done in 5,000 feet of water."

BP is also drilling a relief well, which will take at least two or three months. Why's that taking so long? The well "will take months because of its depth," according to Technology Review. And that's on top of reports that in years prior, regulators expressed concerns that parts of the oil drilling safety equipment might not function well at great depths.

Given that both the safety equipment and the spill containment solutions are unproven at these depths, one might assume that deepwater drilling is being approached slowly, as the technology develops.

That assumption would be wrong. Both the Los Angeles Times and Miami Herald had pieces this weekend noting how much more popular deepwater drilling has become, and how regulators have lagged behind. Safety systems have not kept up, says Miami Herald: 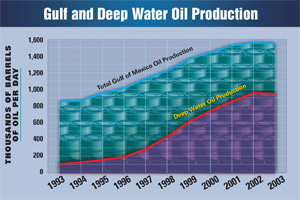 We dug up a a 2004 document from Minerals Management Service, the federal offshore drilling regulator showing that oil and gas production from deep water drilling had increased 535 percent since 1995, to that point. According to the document, oil and gas companies have "made large investments in new technologies" in order to "counter these challenges" of drilling deeper. Some of the technologies named are "massive blowout preventers" and remotely controlled robots -- both of which failed to stop the spill in this case.

According to the Miami Herald, despite its own concerns about the safety equipment MMS did not issue new regulations to strengthen safety requirements, instead continuing to encourage exploration in deeper waters.

A spokesman from the Dept. of Interior, which oversees MMS, told the LA Times that the government's investigation will "include an evaluation of the risk-assessment model currently employed." And BP officials told the Times that since an accident like this hadn't happened before, they couldn't be expected to have the tools to fix it on hand.

For more Gulf oil spill coverage, check our page devoted to the subject.