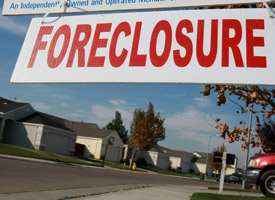 There are plenty of examples of missed opportunities by regulators to pre-empt or at least dull the impact of the current financial crisis. We've already highlighted a number of them. Here's another: At the end of 2005, federal regulators banded together to issue proposed guidelines on "nontraditional mortgage products" -- guidelines that ended up being too little too late.

This morning, the AP focuses on this well-intentioned crackdown, which, after a year of "aggressive lobbying" by banks, was finally put in place. Unfortunately, it emerged watered down, and since it was not binding, but merely a guidance, banks could simply ignore it.

The AP ticks off the proposals dropped from the final guidelines:

The banks' main argument, of course, was that they knew what they were doing. The market could manage its own risks. Of course, a number of the banks that fought the guidelines are now out of business or have been gobbled up by healthier banks.

The home loan president of Washington Mutual, for example, told regulators in 2006 that nontraditional mortgages "have been considered more safe and sound for portfolio lenders than many fixed rate mortgages."

And then there's the chief credit officer of the newly failed Downey Financial: "To conclude that 'nontraditional' equates to higher risk does not appropriately balance risk and compensating factors of these products."

The final guideline, issued in September of 2006, did retain one important guideline: Mortgage lenders should make sure that borrowers could afford their monthly payments on adjustable-rate loans after the rate reset from its lower teaser level.

As the Washington Post reported last week, if this guideline had been instituted earlier (and been binding), it would have had a dramatic impact:

The long delay in issuing the guidance allowed companies to keep making billions of dollars in loans without verifying that borrowers could afford them. One of the largest banks, Countrywide Financial, said in an investor presentation after the guidance was released that most of the borrowers who received loans in the previous two years would not have qualified under the new standards. Countrywide said it would have refused 89 percent of its 2006 borrowers and 83 percent of its 2005 borrowers. That represents $138 billion in mortgage loans the company would not have made if regulators had acted sooner.

There were plenty of limitations to the regulation effort. It came towards the end of the subprime lending boom. It regulated only banks and not mortgage brokers or lenders beyond federal regulators' reach (they were regulated by the states). And even after the guidance was instituted, some banks simply ignored it, the Post reported:

Washington Mutual, for instance, said in a December 2006 securities filing that it was continuing to qualify borrowers based on their ability to afford a teaser interest rate. In August 2007, the bank was still qualifying borrowers at a 2 percent teaser rate instead of the full rate of 5 percent or higher they would eventually face, according to a shareholders' lawsuit filed by Bernstein Litowitz Berger & Grossmann.

Today, the regulators who foresaw the problems with the banks' risky lending give themselves a pat on the back. One former top official at the Office of the Comptroller of the Currency tells the AP that "in hindsight," the original proposed guidelines were "spot on." Other regulators seem not to have any regrets:

Grovetta Gardineer, [Office of Thrift Supervision] managing director for corporate and international activities, said the 2005 proposal "attempted to send an alarm bell that these products are bad." After hearing from banks, she said, regulators were persuaded that the loans themselves were not problematic as long as banks managed the risk. She disputes the notion that the rules were weakened.