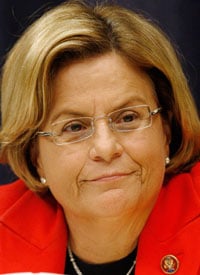 In particular, Ros-Lehtinen focuses on the lack of oversight of the channel's broadcasts, which have at times aired anti-American and anti-Israeli viewpoints. As ProPublica's Dafna Linzer reported, Alhurra's president Brian Conniff does not speak Arabic. During a visit to the channel in June, Linzer and 60 Minutes observed Conniff sit in on a morning editorial meeting that he could not understand. Danny Nassif, the news director, does speak Arabic, but a recent report by the State Department’s Inspector General cast doubt on his claims that he alone is able to oversee the content of Alhurra’s three 24-hour broadcasts, and Radio Sawa’s two radio services. A senior diplomat said that a small team inside the State Department set up to monitor foreign broadcasts stopped watching Alhurra long ago and never listened to Radio Sawa.

"The management at Al Hurra has repeatedly guaranteed that it would make reforms and ensure that hateful rhetoric never be broadcast on its station," Ros-Lehtinen writes. "These have been, it appears, empty promises, and raises the specter that on-sight American managers - with little training in the Arabic language - are simply incapable of exercising editorial control."