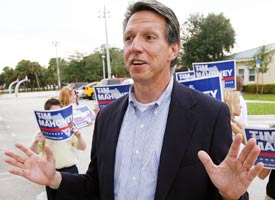 Rep. Tim Mahoney (D-FL) has found himself in an awkward situation similar to the one that prompted the resignation of his predecessor, ex-Rep. Mark Foley in 2006.  Mahoneyâs campaign promise to create "a world that is safer, more moral" was thrown in his face yesterday when ABC News reported that he allegedly gave his ex-mistress (also an ex-staffer) a $121,000 payoff after she threatened to sue him for sexual harassment.

The affair between Mahoney, who is married, and Patricia Allen allegedly began during his 2006 campaign. She was subsequently given jobs on his congressional and campaign staffs. But after she found out that she was not his only extramarital dalliance, she attempted to end the relationship, say friends, and was promptly fired. âYou work at my pleasure,â Mahoney told her in one particularly caustic phone call in January 2008.

For his part, Mahoney offered a vague statement in which he accepted âfull responsibilityâ for his actions but refused to admit to either the affair or the payoff. He claimed that he had broken no laws, but asked the House ethics committee to investigate the matter anyway. He also vowed to forge ahead with his re-election campaign.

Weâre putting Mahoneyâs mischievousness at number four on our Scandal Watch, so check back for updates.