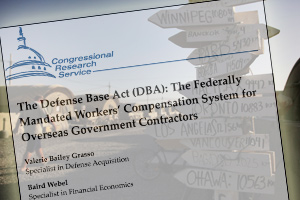 The Congressional Research Service has found that the Defense Department was paying far higher premiums to insure civilians working in war zones than either the State Department or the U.S. Agency for International Development.

The insurance is required by the Defense Base Act and provides medical care and disability benefits for those injured while working under U.S. contracts overseas. Pentagon contractors negotiate rates individually with insurance firms, while the other agencies use a bidding process to set a blanket rate.

The report (PDF), obtained by ProPublica, found that it was nearly impossible to determine why premiums were set so high for the Pentagon. The agreements between the carriers and individual contractors are private, even though taxpayers pay the premiums.

And while the Labor Department oversees the system, it has no power to investigate rates. In the past, both the Government Accountability Agency (PDF) and the Army Audit Agency (PDF) have questioned whether insurance carriers such as AIG charged the government too much for the policies. It is "difficult to assess what factors are currently used to set current DBA premiums," the analysis said. AIG says its rates are fair and notes that they have declined over time.

The report acknowledged that it might be difficult to find a single insurance carrier to cover all the contractors for the Pentagon, which employs far more civilian workers than any other agency. It raised the possibility that the government might save money by simply taking over the system.

The Defense Base Act already requires the government to reimburse insurance carriers for costs incurred when civilian contract workers are injured in combat. By taking the system over, the government would cut out the middleman, the report said. "There are several potential advantages to having the federal government self insure," the report said. The Congressional Research Service produces non-partisan analyses for Congress on policy matters.

One of the possible advantages is quicker payment of claims. The report pointed to a congressional hearing in June prompted by investigations by ProPublica, the Los Angeles Times and ABC News finding that carriers routinely denied claims for injured workers. At the hearing, the Labor Department's deputy secretary, Seth Harris, acknowledged "extensive and troublesome" flaws in the system. The current system, the CRS report found, "can cause delays for claimants, including claimants with clear (war injury) cases that will eventually be paid" by the federal government.

The Defense Department is expected to weigh in on suggestions for reforming the system later this summer.