In the chaos of disaster and war, governments and aid agencies have largely overlooked the needs of the estimated 2.5-3.5 million displaced persons worldwide who are disabled, according to a report released today by the Women's Commission for Refugee Women and Children and co-funded by the United Nations High Commissioner for Refugees.

"They've been so invisible to us," Dale Buscher, director of the Commission's protection program, told ProPublica. "Because of the lack of accessibility in many of these settings, these people are often housebound, so we haven't had a clear indication of how many people with disabilities are out there. When they're invisible and you don't have appropriate mechanisms for identifying them, you don't recognize the need." 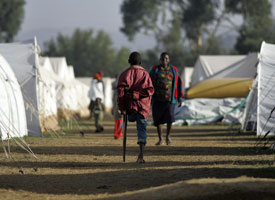 Representatives of the Commission visited five countries and consulted with aid officials in several others.  They found numerous problems, including:

In war-torn Darfur, elderly people and people with disabilities were left out of food aid distributions, leading to malnutrition and health problems. Awareness of the needs of displaced persons living in urban environments was generally even poorer than in refugee camps. However the researchers reported a few positive findings - many children with disabilities were attending primary school in refugee camps, and some received additional support and rehabilitation services.

The Women's Commission has produced a resource kit (pdf) to give humanitarian workers concrete guidance on how to better include those with disabilities in their programs.

Although the report focuses on foreign countries, its message is equally applicable to disaster preparedness and response in America: When crisis strikes, those who most need assistance will often have the hardest time accessing it. Too often, they have been overlooked.