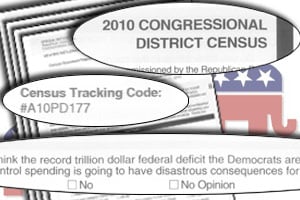 An editor here at ProPublica received this "Census" form in the mail last week. In big, bold letters at the top it announces, "2010 CONGRESSIONAL DISTRICT CENSUS." The form even has a "Census Tracking Code." But it's not from the Census Bureau.

It's actually a survey from the Republican National Committee. The mailer includes questions such as: "How much does it concern you that the Democrats have total control of the federal government?" "Do you think the record trillion dollar federal deficit the Democrats are creating with their out-of-control spending is going to have disastrous consequences of our nation?" And, "Do you believe the Obama Administration is right in dramatically scaling back our nation's military?" At the end, it asks for a donation to the Republican Party.

Other people -- including the Democratic governor of Montana and a Democratic representative in Georgia -- have gotten the survey too.

Have you received a faux census recently?

The faux Census form doesn't appear to be illegal. The United States Postal Inspection Service's general counsel reviewed the survey in January and determined that it did not violate the Deceptive Mailings Prevention Act of 1990 (PDF). The act prohibits any mail from flat-out impersonation of a federal organization. In this case, using the word Census, even with a capital "C," does not equate to impersonation of the U.S. Census Bureau, said Pete Rendina, an Inspection Service spokesman.

The survey also doesn't appear to violate any Federal Election Commission fundraising rules, said Judith Ingram, FEC spokeswoman, because it includes disclaimers about who is allowed to donate.

But why would the RNC send something under the guise of the Census?

We called Mark Weiner, the founder of Winning Mark, a progressive-leaning direct-mail campaign consultant, and he said using the term "Census" could earn the document a second glance, thus increasing the response rate and maybe even influencing an independent voter with its slanted questions.

"You're trying to leverage the most valuable commodity -- other people's money," he said. "This is obviously piggybacked on a lot of advertising around responding to the real Census."

The RNC didn’t respond to our questions about why it chose to have its survey mimic a Census form. But spokesman LeRoy Coleman issued this written response: "The document clearly indicates that it is an RNC mailer. The purpose of this document is to gather Republican opinion from across the country and raise a little money."

Rep. Carolyn Maloney, D-N.Y., filed a bill today (the "Prevent Deceptive Census Look Alike Mailings Act") (PDF) that would require more prominent disclosures on any mailing that uses the word "census," although it wouldn’t outlaw the practice altogether. Maloney's office says the congresswoman had filed a complaint about the mailer with the Inspection Service, and she filed her legislation after learning the Inspection Service won't be issuing penalties.

The Democratic National Committee told us that it had never sent out anything disguised as a Census form. But here's where you come in: Have you ever received anything like this before, from Republicans, Democrats or a company? We'd like to hear about it.