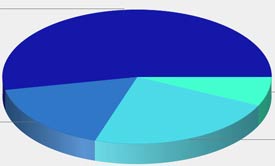 We really appreciate your responses to our reader survey a couple of weeks ago and wanted you (collectively) to know what you (individually) thought.

Also, we are reporting the e-mail and Web respondents separately because while we had more respondents from the e-mail link (presumably because of the ease of response), traffic figures indicate that we actually have more readers who find us on the Web.

Highlights from the survey:

Further demographic facts about our readers:

On our open-ended questions, readers suggested that ProPublica should do more to make people aware of our existence and do more international work.

When asked what they would change, "nothing" was the most common response, with "too soon to tell" (and variants of that) third. Second was Web site design and layout (46 respondents, or about 4%). On what readers like most, common responses were "investigations" (11%), "depth", "independence", "fills gap" and "non-profit."