Robert Rundo, a leader of the violent white supremacist group known as the Rise Above Movement, pounded the man, hitting him with a series of thudding punches — left, right, left — that sent his foe staggering backwards.

But this wasn’t a street brawl captured on video: It was a boxing match — complete with 12-ounce gloves, a referee, and scantily attired ring girls — and it was promoted by a white supremacist fight club in Ukraine. The event was held inside a bunker-like building in Kiev, with fighters competing inside a cage of the sort familiar to mixed martial arts fans in America.

With the skinhead subculture fading, neo-Nazi organizers in Europe have turned to promoting boxing and mixed martial arts bouts with the aim of pulling in new recruits.

Rundo’s fight in Ukraine occurred this spring, as he and two other RAM members toured Europe. In Kiev, Rundo and other RAM members hung out with Denis Nikitin, a burly Russian soccer hooligan who has become one of the most successful fight promoters in ultra-nationalist circles.

On social media the group posted video and photos from the event, which was held in May. Based in Southern California, RAM’s members were involved in political violence last year in Charlottesville and other American cities. The group says it wants to revive the “warrior spirit” of the white male, and its videos of fight-training, weight-lifting and street melees have proven popular on social media.

Before traveling to Ukraine, Rundo and another RAM member, Robert Smithson, visited the German town of Ostritz to compete in a mixed martial tournament at the Shield and Sword festival, a white power convergence held on Hitler’s birthday. Attracting roughly 1,000 fascists from across the continent, the gathering was arranged by Germany’s National Democratic Party, the closest thing the country has to an openly Nazi political party. The mixed martial arts tournament held that weekend, Kampf der Nibelungen, is the largest white power combat sports event in Europe, according to researchers monitoring European extremists.

Observers of the far-right in Europe are concerned about the infiltration of neo-Nazis into the boxing and MMA scenes — and they’re particularly worried about Nikitin.

“He is seen as dangerous by those who monitor the far right” due to his “outright neo-Nazi ideology — preaching racial war and the need to ‘reconquer’ the ‘living space’ of the white man in Europe,” said Pavel Klymenko, a Ukrainian researcher with the FARE Network who tracks soccer hooligans.

According to Klymenko, Nikitin has taught knife-fighting techniques and hand-to-hand combat skills to extremist groups in Russia, Ukraine, Romania, Italy, Germany and the United Kingdom. In recent years he has launched a successful streetwear company called White Rex — one T-shirt design features an iron cross, an emblem used by the Nazis, and the words “YOU MUST MURDER,” while another depicts the logo of the Spanish fascist party, or Falange. 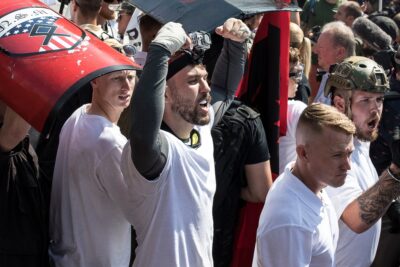 Nikitin has repackaged older white supremacist ideas for a new generation, rebranding them as “nationalist concepts,” said Karim Zidan, an independent journalist who writes on the intersection of sports and politics. “Nikitin is a massive figure in both MMA and football hooliganism. In a way, he’s weaponized both sports for his cause,” Zidan told ProPublica and Frontline.

At the Southern Poverty Law Center, Keegan Hankes, an analyst who follows RAM, said the group’s trip to Europe “signals that they aren’t just hobbyists. It’s gives them credibility” within the U.S. white power movement.

Social media postings show Rundo acquired several new tattoos on RAM’s European excursion, including an “8” on each shoulder (88 is the white supremacist code for “Heil Hitler”) and the White Rex logo (a Viking warrior) on his right shin with the word “fanatic” emblazoned below.

RAM has also begun importing White Rex T-shirts and selling its own garments as a means of funding the group. The Southern California organization operates an online store, Right Brand Clothing, which carries items from Nikitin’s clothing line as well as other brands like Svastone.

Nikitin refused to comment when contacted by ProPublica and Frontline, saying via email, “There will be no contact or information exchange with you. Just sit quietly and see us rise.”