This story was co-published with The Denver Post's The Cannabist

I walked through clouds of marijuana smoke Friday night to get to the Denver Nuggets basketball game. The sweet smell lingering in the air reminded me less of a family event and more of the time I saw AC/DC on "The Razor's Edge" tour at the old McNichols Sports Arena.

I grew up in Colorado, but it's been a while since I lived in the state. When I returned for a recent conference, I found that a place settled by the Gold Rush is now mad about reefer. In 2012, Colorado voters became the first in the nation to approve recreational pot use. The good times rolled out Jan. 1, when stores started selling it.

I've never tried pot, but I graduated from the University of Colorado — Boulder, which is famous for its annual "4/20" public pot parties. At CU, you can practically get a contact high walking to class. But I saw more public pot use in my two-day visit to Lower Downtown Denver than in years spent at Boulder.

It's supposed to be illegal to smoke or consume pot in public. But then the day after the game, while jogging down the Speer Boulevard bike path, I passed a guy lounging under a tree lavishing his affections on a joint.

Anyone over 21 can walk into a dispensary and load up on bud, marijuana baked goods and candy.

The presence of legal pot right outside our hotel made people giddy at the conference I attended — a meeting of the Association of Health Care Journalists. At a reception, one woman passed a friend gummy bears infused with THC, or tetrahydrocannabinol, the main psychoactive ingredient in pot.

And then there was a friend of mine at the conference — I'll call him "Dude" because he shared his story on condition I didn't name him. He had a bad reaction after eating too many marijuana gummy bears.

There's a running debate about whether pot should be legal for recreational use, but the Colorado experiment is rapidly unfolding, and it could help determine whether other states follow or shy away. (Washington voters also have approved recreational marijuana, and the state expects to begin licensing retailers in July.)

Two things stand out after my visit.

First, legal pot is attracting new and possibly naïve users — creating risks that some don't bargain for. Second, the public health system's desire to protect people may be well-intentioned, but regulation and efforts to track the health effects have a ways to go.

Dude had only smoked pot twice in his life, about 25 years ago, but he got curious and tried some pot gummy bears from a shop called the LoDo Wellness Center. Other than being infused with THC they looked and tasted like ordinary candy. Dude and his buddy paid $20 for a pack of 10.

Dude ate a bear before dinner but felt nothing. So he popped another during the meal. Nada. Ripoff, he assumed. So he ate a few more — five total, he said — but still felt nothing. He fell asleep in his hotel room at 11 p.m.

Two hours later, Dude awoke feeling like he was on a roller coaster. His entire body tingled, and he was light headed. He tried to stand, but his left leg was so numb he couldn't walk to the bathroom. His pounding heart strained his rib cage as waves of euphoria and anxiety washed over him.

Was this the high? An overdose? A heart attack? A stroke?

Totally debilitated, Dude thought about calling an ambulance but feared ending up in the E.R. or a police station. So he stayed put, guzzled water, pulled a blanket over his head and clutched a pillow. The symptoms lasted two hours, but it took a full day to feel normal again.

Dude's experience and the open pot use I saw made me wonder about public health aspect of legalization. I called some experts to find out if there have been safety problems, how pot and gummy bears are being regulated and whether consumers are being educated about the risks.

The foods with pot — typically baked goods but also sodas, candies and even lasagna and pizza — cause the most unpredictable highs because the effects aren't immediate and potency varies, I learned.

In the case of gummy bears, one is considered a single serving. But Dude kept eating them because he didn't feel anything.

Haley Andrews, manager of the LoDo Wellness Center, said about half the shop's customers are marijuana novices, so the staff takes time to educate everyone who buys. Users should start with one 10 mg gummy bear, she said, and never consume more than 20 mg at a time.

Andrews said the gummy bear bottle's label listed the number of 10 mg servings inside and advises users to consume with caution because the product had not been tested for contaminants or potency. There is no mention of a delayed response, she said.

Accurate or not, labels are often ignored.

Dude said his buddy held onto the package so he never looked at it. He claims no one at the shop gave him any warnings about the gummy bears.

There were signs in the shop about how the different strains of pot would make users feel — "calm" or "excited" — but Dude said he saw no displays with advice for novice users, how many gummy bears are too many, or warnings about a delayed response.

Andrews said the staff makes every effort to ensure people use the products safely, but that it's possible Dude somehow slipped through the cracks.

Generally, using too much pot isn't life-threatening. But a reaction like Dude's could contribute to a heart attack or stroke for someone who has health problems, said Dr. Tista Ghosh of the Colorado Department of Public Health. She said recreational pot has been unexpectedly popular with the older crowd.

"There's a lot we don't know," Ghosh said. "I feel like in some ways we're like tobacco 50 years ago. More research needs to be done on this from the public health and individual health perspective."

Looking back on it, Dude said he was glad to be in his hotel room when the reaction hit him and not in a place where he could endanger others. According to reports in the Denver Post, pot use has contributed to car crashes and the recent death of a Wyoming college student, who on a spring break visit to Denver, began acting strangely and jumped from a fourth-floor hotel balcony.

Though ruled an accident, a coroner's report said "marijuana intoxication" from eating several pot cookies was a significant contributor to the 19-year-old's death, the Post reported.

Children are especially at risk. It's illegal to make candy or fruit-flavored cigarettes in the United States, but pot candies and cookies in Colorado have been some of the best-selling products. Although the packaging is child-proof, it doesn't stop kids once it's open.

Dr. Andrew Monte, a medical toxicologist at the University of Colorado Medical School and Rocky Mountain Poison and Drug Center, didn't have hard numbers but estimated that there is a poison control call every few days about a child accidentally eating marijuana products.

There also are reports from emergency room doctors, though no official numbers yet, of children showing up to hospitals in extreme states of drowsiness after accidentally consuming THC products, Monte said. Some end up getting expensive diagnostic work-ups like CT scans and spinal taps, he said. 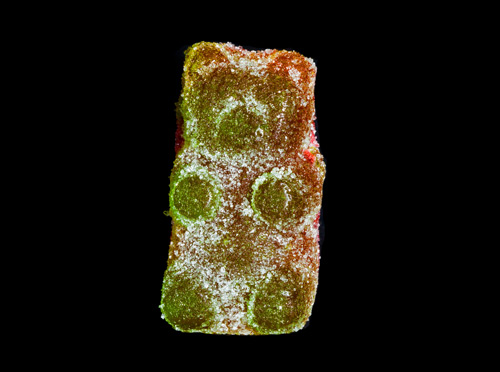 "What kid doesn't want a brownie or a gummy bear?" Monte said.

So far there are no mandatory tests of the potency or purity of recreational pot or THC food products, but they are scheduled to roll out in the coming months under the rules to implement the new law.

The process is more complicated than it would be in other cases because state regulators have not been able to rely on the federal health agencies. The federal government deems marijuana an illegal substance, so it's not participating in the oversight, Ghosh said.

Ghosh said the Colorado regulators have had to start some things from scratch, including finding labs that can be certified to test pot products.

He said the industry is committed to robust regulation.

Elliott, Ghosh and Monte agree that more needs to be done to educate consumers.

The state has put up a website with information about the law and advice for parents and is running a "Drive High, Get a DUI" campaign, efforts that Elliott says are supported by the marijuana industry.

Public health also depends on people using common sense. My friend Dude is a smart guy, but he knows he was a dumb consumer when he gobbled the pot gummy bears. Now, he regrets assuming that because marijuana was legal nothing could go wrong.

"I was ignorant about the whole thing," he told me later. "I am embarrassed to admit that I just ate the gummy bears because it seemed like fun.