Federal agencies were preparing these rules and dozens more when Donald Trump was elected. In one of his first acts, the president quietly froze them. That isn’t unusual. Presidents Clinton, Bush and Obama signed similar orders.

Unlike in previous administrations, however, this time the proposed rules are long shots to be finished and enacted. Because of “the very clear signals of an anti-regulatory mandate from the president,” they are less likely to be implemented than in prior eras, according to Sally Katzen, a New York University law professor and former deputy director for management at the Office of Management and Budget. Instead, they may vanish with little or no announcement or explanation. Already, they have disappeared from the main federal website that lists rules in the works.

Five federal agencies contacted by ProPublica said they are reviewing regulations but declined to address specifically the pending rules that were put on hold. A spokesman for the Health Resources and Services Administration said his agency is pursuing “efforts to reduce regulatory burden.” The White House did not respond to a request for comment.

While the media and the public focus on the Russia scandal or who has the ear of the president, the Trump administration and the Republican-controlled Congress are conducting a broad assault on regulations. Trump, making regulatory rollback a centerpiece of his administration, contends onerous rules stifle American businesses and the economy. Steve Bannon, his chief strategist, promised supporters a “deconstruction of the administrative state.” On Monday, The New York Times surveyed the sweeping efforts to roll back environmental rules, restrictions on Wall Street, and other limitations on businesses of every stripe.

Finalized rules cannot be easily rescinded. Doing so often requires some congressional action. And agencies typically must explain why they are canceling a rule. Groups that object sometimes sue to preserve the regulations.

But dozens of rules are pending and those may be easier to kill. After previous administrations’ freezes, agencies examined proposed rules and went forward with the vast majority, according to administrative law experts. This time may be different. A few days after his freeze, Trump signed another executive order on Jan. 30, ordering that agencies cut two old regulations for each new one. Given that edict, federal agencies, like the Department of Transportation or the Environmental Protection Agency, may resist finalizing pending rules.

Regulations often undergo review for years before they take effect. Typically, after a law is passed, the appropriate agency comes up with proposed rules for implementing it, and puts them out for public comment. Supporters and opponents (often corporations or their representatives) weigh in. The agency then edits the rules and sends them to the Office of Information and Regulatory Affairs, a body within the Office of Management and Budget. There, the office conducts an economic analysis to make sure the costs don’t outweigh the benefits. Finally, if the new regulations clear all the hurdles, they are published in the Federal Register. After 60 or 90 days, they become effective.

At least 25 rules were waiting on the OIRA runway for final approval in the waning days of the Obama administration. Some had gone through the entire process and merely required being sent to the Federal Register. (A separate group of regulations were at the Federal Register but had not become effective. These are on hold as well.)

Among the pending rules was a Department of Transportation initiative calling for all railroad operations to have at least two crew members. Proponents say the rule could minimize the risk of a repeat of the 2013 Canadian train accident in which a derailed, unattended locomotive became a burning missile hurtling through a small Canadian town called Lac-Mégantic, killing 47 people and spilling 6 million liters of crude oil. The railroad industry has objected to the new restriction, contending the rule is too costly and unlikely to minimize accidents.

Another rule would require that fluorescent lights in daycares and schools contain no PCBs, which can become toxic when burned. Still others cover everything from grain elevator performance to disclosures about foods that have been bioengineered.

Trump’s two-for-one edict already faces problems. It stipulates that the incremental cost of new regulations in 2017 must be zero: In other words, that discarding two regulations must save as much money as the new regulation costs. The trouble with this approach is that regulations typically entail large upfront investments, but little in the way of ongoing outlays. For instance, if the government requires retrofitting of certain plants with safer machines, that’s expensive at first. But once manufacturers have complied, the ongoing cost is minimal. Therefore, to find enough savings to offset a new regulation might mean cutting many more than two old ones. 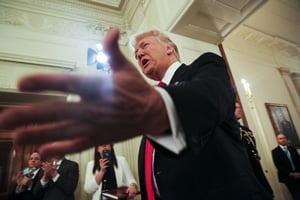 The hiring of three former lobbyists to work in the White House raises questions about how the Trump administration is enforcing the president’s executive order on ethics. Read the story.

Perhaps more significantly, scholars argue that the Trump order is against the law. “Agencies do not simply regulate for the sake of regulation — each regulation is aimed at implementing a specific provision of a statute passed by Congress,” Columbia Law School’s Michael Burger and Jessica Wentz wrote recently. Indeed, liberal groups Public Citizen, the National Resources Defense and the Communications Workers of American filed a lawsuit to block the Trump executive order, contending it is arbitrary.

But there’s little legal recourse for resurrecting proposed rules, which might be shelved without any public notice. If agencies do so, it’s unclear if they have to explain why. Liberal interest groups argue that ditching pending rules without a legitimate justification might not stand up to a court challenge, though they concede it’s uncharted territory. They say rules that have undergone public comments and other scrutiny may also be protected under the prohibitions against arbitrary regulatory decisions.

“We believe it is illegal to kill a final rule without good reason, not just that Donald Trump doesn’t like rules,” said Rena Steinzor, a law professor at the University of Maryland and former president of Center for Progressive Reform, a think tank. “That’s not good enough.”