This story was co-published with The Atlantic.

Much as the role of the addictive multibillion-dollar painkiller OxyContin in the opioid crisis has stirred controversy and rancor nationwide, so it has divided members of the wealthy and philanthropic Sackler family, some of whom own the company that makes the drug.

In recent months, as protesters have begun pressuring the Metropolitan Museum of Art in New York City and other cultural institutions to spurn donations from the Sacklers, one branch of the family has moved aggressively to distance itself from OxyContin and its manufacturer, Purdue Pharma. The widow and one daughter of Arthur Sackler, who owned a related Purdue company with his two brothers, maintain that none of his heirs have profited from sales of the drug. The daughter, Elizabeth Sackler, told The New York Times in January that Purdue Pharma’s involvement in the opioid epidemic was “morally abhorrent to me.”

Arthur died eight years before OxyContin hit the marketplace. His widow, Jillian Sackler, and Elizabeth Sackler, who is Jillian’s step-daughter, are represented by separate public relations firms and have successfully won clarifications and corrections from media outlets for suggesting that sales of the potent opioid enriched Arthur Sackler or his family.

But an obscure court document sheds a different light on family history — and on the campaign by Arthur’s relatives to preserve their image and legacy. It shows that the Purdue family of companies made a nearly $20 million payment to the estate of Arthur Sackler in 1997 — two years after OxyContin was approved, and just as the pill was becoming a big seller. As a result, though they do not profit from present-day sales, Arthur’s heirs appear to have benefited at least indirectly from OxyContin.

The 1997 payment to the estate of Arthur Sackler is disclosed in the combined, audited financial statements of Purdue and its associated companies and subsidiaries. Those documents were filed among hundreds of pages of exhibits in U.S. District Court in Abingdon, Virginia, as part of a 2007 settlement in which a company associated with Purdue and three company executives pleaded guilty to charges that OxyContin was illegally marketed. The company paid $600 million in penalties while admitting it falsely promoted OxyContin as less addictive and less likely to be abused than other pain medications.

Arthur’s heirs include his widow and grandchildren. His children, including Elizabeth, do not inherit because they are not beneficiaries of a trust that was set up as part of a settlement of his estate, according to court records. Jillian receives an income from the trust. Elizabeth’s two children are heirs and would receive bequests upon Jillian’s death. A spokesman for Elizabeth Sackler declined to comment on the Purdue payment.

Janet Wootten, a spokeswoman for Jillian Sackler, acknowledged that, as a result of a “protracted estate negotiation,” payments to Arthur Sackler’s estate “were made over many years through the mid-1990s.” She added, however, that there is no evidence that the note was paid with OxyContin profits.

“There is no differentiation in these documents of assets, profits, debts, or the like, among the various companies, let alone with regard to a specific pharmaceutical product,” she said. “In fact, nowhere do these documents identify the source of funds used to pay the note (or notes).”

Wootten said the Purdue documents “in no way substantiate any suggestion or claim that Dr. Sackler’s and/or his widow’s philanthropy has in any way been funded by OxyContin.”

The three Sackler brothers are deceased. Arthur died in 1987, Mortimer in 2010 and Raymond in 2017. The families of Mortimer and Raymond own 100 percent of privately held Purdue Pharma and form the majority of its board.

Purdue declined to answer questions about the note and the 1997 payment. The company pointed to an existing statement that says “recent news coverage has wrongly characterized the relationship” between Arthur and Purdue and that “neither he nor any of his descendants have ever had any involvement or financial stake in” the success of OxyContin.

OxyContin is one of the biggest-selling opioids in the U.S., with revenues peaking at $3.1 billion in 2010. Purdue promoted OxyContin by showering doctors with junkets and speaking engagements, according to an investigation by the U.S. General Accounting Office. Since 1999, four years after OxyContin was approved, fatal overdoses related to prescription opioids have skyrocketed fivefold to 17,087 deaths in 2016. Earlier data isn’t available, nor is it known how many of the deaths are linked to OxyContin.

The history of Purdue traces back to 1952 when the three brothers — all medical doctors — purchased the Purdue Frederick Co. in Manhattan. Arthur was both mentor and visionary. Arthur was inducted into the Medical Advertising Hall of Fame, which credited him with shaping “pharmaceutical promotion as we know it today.” He pioneered marketing directly to doctors and advertising pharmaceutical products in medical journals. One of his most successful marketing efforts was the promotion of Valium in the 1960s — an effort he directed from a company unaffiliated with Purdue Frederick.

Soon after Arthur died in 1987, his estate sold his one-third interest in the Purdue Frederick Co. to his brothers for $22.35 million, according to the 2003 book, “Pain Killer,” by New York Times journalist Barry Meier. The amount of the note carried on Purdue’s books is the same as the purchase price, indicating that the payment was not made up front. Before paying off the note, Purdue paid interest on it at a rate as high as 14 percent per year, according to the financial documents.

When Arthur’s estate settled in 1994 following a lengthy battle between his widow Jillian and his children, the agreement detailed that a note from the Purdue Frederick Company “of at least $19 million” would be included in the new trust.

Purdue had other successful products before OxyContin, although none on its blockbuster scale. They included another opioid painkiller, MS Contin, as well as antiseptics and laxatives.

Wooten said the payment’s timing was not connected to OxyContin’s growing popularity. “Timing of payments had nothing to do with when funds were available,” she said, adding that it would be “absurd” to suggest that the company or Arthur’s brothers “had insufficient funds to make the estate payments following Arthur’s death in 1987.”

Long before OxyContin was introduced, the Sackler brothers already were notable philanthropists. Arthur was one of the world’s biggest art collectors and a generous benefactor to cultural and educational institutions across the world. There is the Arthur M. Sackler Gallery at the Smithsonian, the Arthur M. Sackler Museum at Harvard University, and the Jillian and Arthur M. Sackler Wing of Galleries at the Royal Academy of Arts in London.

His brothers were similarly generous. They joined with their older brother to fund the Sackler Wing at the Met, which features the Temple of Dendur exhibit. The Mortimer Sackler foundation was the principal donor of the Serpentine Sackler Gallery in London; the Sackler name is affiliated with prestigious colleges from Yale University to the University of Oxford as well as world famous cultural organizations, including the Victoria and Albert Museum in London. There is even a Sackler Rose — so christened after Mortimer Sackler’s wife purchased the naming rights in her husband’s honor.

Now the goodwill gained from this philanthropy may be waning as the Sackler family has found itself in an uncomfortable spotlight over the past six months. Two national magazines recently examined the intersection of the family’s wealth from OxyContin and its philanthropy, as have other media outlets across the world. The family has also been targeted in a campaign by photographer Nan Goldin to “hold the Sacklers accountable” for OxyContin’s role in the opioid crisis. Goldin, who says she became addicted to OxyContin after it was prescribed for surgical pain, led a protest last month at the Metropolitan Museum of Art, in which demonstrators tossed pill bottles labelled as OxyContin into the reflecting pool of its Sackler Wing.

While it doesn’t appear that any recipients of Sackler charitable contributions have returned gifts or pledged to reject future ones, pressure and scrutiny on many of those institutions is intensifying. In London, the National Portrait Gallery said it is reviewing a current pledge from the Sackler Trust.

Against that backdrop, Jillian Sackler, who was Arthur’s third wife, turned to Rubenstein Communications, which has been distributing a “fact sheet” to media reporting on the controversy.

The first item listed was that “Arthur M. Sackler, his widow and heirs, have never financially benefited from the sale of OxyContin.” It went on to say that “Prominent news media, including The New York Times, The Washington Post, TIME, Economist, CNN, the Associated Press, Agence France Press, The Guardian, Huff Post, Art News, etc., have published corrections and clarifications noting the distinction between Arthur M. Sackler and his heirs — who have had no financial interest in the sale of OxyContin — and other branches of the Sackler family.”

Public relations firm BerlinRosen in New York City represents Elizabeth Sackler, who has been openly critical of Purdue Pharma. She has said that none of her father’s descendants “benefited in any way” from the sale of OxyContin while adding: “I stand with all angry voices against abuse of power that harms or compromises any and all lives.” 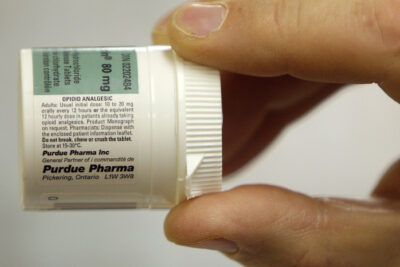 Her charitable work, however, has received financial support from the side of the family that ran Purdue after her father’s death and earned profits from the sale of OxyContin. In 2011, Purdue Pharma donated $500,000 to a foundation named after Elizabeth’s uncle Mortimer, and the foundation gave the same amount to the Brooklyn Museum for the Sackler Family Curator at the Elizabeth A. Sackler Center for Feminist Art. Elizabeth Sackler is a trustee of the museum and the benefactor of the eponymous center, which is the permanent host of the Dinner Party, an installation by the artist Judy Chicago that features three large tables in the shape of a triangle. There are 39 place settings at the table for famous women, ranging from the mythical Fertile Goddess to the writer Virginia Woolf.

In 2012, the wife of the youngest Sackler brother, Raymond, contributed $5,000 to Elizabeth Sackler’s charitable foundation, which has provided substantial financial support to the feminist center at the museum. A museum spokeswoman and Elizabeth Sackler’s spokesman declined to comment about the donations.