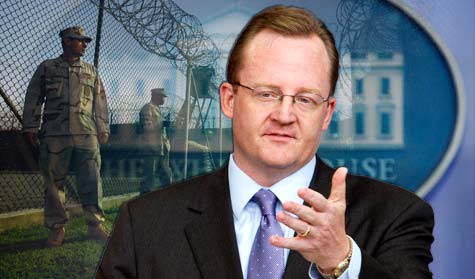 Yesterday, White House spokesman Robert Gibbs made two claims about the administration’s handling of detainees at Guantanamo Bay that overstated its progress in clearing the prison. According to Gibbs, the administration has transferred an unprecedented number of detainees from the prison and has promptly complied with court orders to release others.  But those claims are incorrect.

In describing efforts to send some detainees home or to third-country hosts, Gibbs told reporters: "As you know, those that can be safely and securely transferred either back to their home country or to a third country, more of those transfers have taken place in the past eight months than have taken — than took place in the previous eight years."

In fact, in the last eight months, 31 detainees have been transferred from Guantanamo to other countries. In the eight years before that, more than 520 detainees were sent home or to third countries.

In total, 32 detainees have been transferred since Obama was inaugurated. In the last year of the Bush administration, 36 detainees were transferred out of Guantanamo.

We’ve asked the White House for comment and will update when we get it.

Gibbs also claimed that the White House has complied with all court orders to release detainees who won their habeas petitions in U.S. courts.

At Tuesday's briefing, Gibbs told reporters that when courts have ruled that detainees should not be held at Guantanamo, those detainees have been transferred "back to either their home country or third-party countries."

Yet there are outstanding court orders for the release of 10 detainees at Guantanamo. Seven of the 10 are Chinese Muslims who are ethnic Uighurs. The Uighurs were ordered released in October 2008, but the government is struggling to find countries to take them. In the meantime, the Uighurs have a case pending in the Supreme Court seeking their release into the United States.

Update: This post has been updated with an additional quote from White House spokesman Robert Gibbs.

Correction: This post originally referred to a briefing on Wednesday. The briefing actually took place on Tuesday, Dec. 15, 2009.