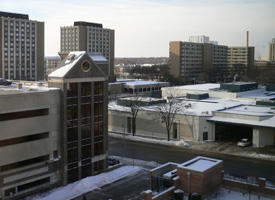 This past weekend, the Milwaukee Journal Sentinel published a slew of articles about dozens of doctors at the University of Wisconsin-Madison who have side jobs with drug companies. Sen. Charles Grassley (R-IA) has also trained his eye on UW, where federally mandated disclosure forms don't require doctors to specify the amount of any industry pay exceeding $20,000.

As a result, patients are often left in the dark about potential conflicts of interest: Fourteen of the 20 doctors interviewed by the Journal Sentinel said they "did not tell patients about their financial relationships with drug companies when they prescribed drugs made by those companies." And critics say doctors are more likely to prescribe drugs made by companies they take money from, even if there are less expensive ones available or they're not approved for the problem at hand.

One Journal Sentinel report focused on a UW doctor who conducted a clinical trial for an asthma drug made by Merck, a company from which he has raked in somewhere between $35,000 and $70,000 as a lecturer and consultant. Although the participants in the trial were told about the connection -- albeit buried in a consent form and without mentioning either the researcher or company by name -- medical professionals say simple disclosure doesn't negate the conflict of interest.

Another UW doctor was paid between $10,000 and $20,000 by Pfizer to talk up Chantix, its anti-smoking drug. A year ago, that doctor became the medical director of a state-funded program involving treatment for smokers. And, if you're not familiar with Chantix, it doesn't exactly have the best track record. In fact, it has one of the worst: For six months, it was associated with more problems than any other prescription drug on the market, according to an October watchdog report. A controversial Chantix trial involving U.S. veterans was also the subject of an ABC News-Washington Times investigation earlier this year. The doctor defended his talks to the Journal Sentinel, noting that another smoking-cessation drug is also associated with serious risks, as is smoking itself.

The dean of UW's medical school responded to a letter from Grassley by admitting that the school's disclosure requirements are inadequate and "indefensible." He promised to update them, telling the Journal Sentinel that the change could be in place by April.