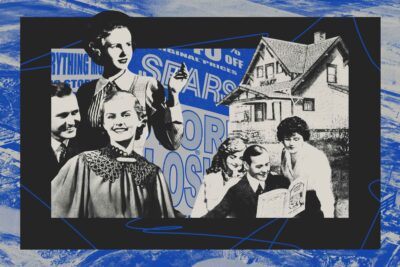 Over the course of 30 years, the taxpayers of Illinois gave Sears the equivalent of more than a half-billion dollars in tax breaks and incentives to locate its headquarters in Hoffman Estates. In return, the retailer agreed to provide good-paying corporate jobs and return millions of dollars in tax payments.

Now, as Sears is struggling to survive, the question is whether the deal was worth it.

To find out, ProPublica and the Daily Herald commissioned a study of 40 years of economic data by the Center for Tax and Budget Accountability, or CTBA, a Chicago-based, bipartisan research and advocacy organization focused on social and economic justice.

The results were persuasive: the CTBA study found no evidence that the massive package of tax incentives made a long-term difference to the economic well-being of Hoffman Estates compared to that of other similar nearby suburbs that did not make such corporate deals.

Measured by economic indicators such as property values and employment, Arlington Heights, Downers Grove, Elgin, Palatine, Schaumburg and Wheaton all grew at roughly the same rate as Hoffman Estates.

The study also found no evidence of a lasting impact on Hoffman Estates. A short-term spike in property values did not endure beyond the initial 10 years of the project. Sears’ effect on Hoffman Estates’ labor force was negligible, despite predictions that the company’s arrival would prompt a massive influx of new jobs.

Simply put, the study found that the Sears deal was the economic equivalent of an energy drink: It provided a jolt of caffeine and sugar that quickly wore off.

“For as large of a deal as the Sears deal was, the impact was very short-lived,” said Drazzel Feliu, CTBA’s research director. “It was a nice bump, but it wasn’t sustainable. We don’t have any proof that the (Sears deal) changed growth.”

The complete study, and its methodology, are available online here.

Without the tax incentives, Sears would have never come to Hoffman Estates in the first place, they said. They pointed to the overall growth of the value of the land where Sears built its corporate campus and developed a business park and entertainment district. In 1989, the property value of the land around Sears was $6.4 million. By 2018, the figure was slightly under $242 million.

“That’s an awful lot of money,” said McLeod, who noted that the growth funded infrastructure which allowed potential development on thousands of acres of land in and around the Sears campus. “You’ve got the water mains, you’ve got the sewer mains. And, you know, we still have all that vacant land out there yet.”

Had it not been for the arrival of Sears and the development that occurred afterward, McLeod said, the land would “probably still be empty, corn growing out of it, more than likely.”

The study says the mayor might be wrong to assume there would have been no development without Sears.

Consider, for example, a comparison between the villages of Hoffman Estates and Downers Grove.

The two villages have much in common. Both have a population of about 50,000. Both are predominantly white. Both have a median income of around $85,000. They have good schools and lots of parks, low crime and well-stocked libraries.

To be sure, the villages have differences. Downers Grove is an older town with a traditional downtown shopping district. Hoffman Estates’ amorphous sprawl defines the modern suburb.

But over the past 30 years, the local economies of Downers Grove and Hoffman Estates have neatly matched each other. Property values have risen and fallen. Businesses have come and gone. Unemployment rates have fluctuated.

During that time, Illinois and Hoffman Estates officials gave Sears its huge tax breaks and subsidies. Downers Grove, on the other hand, managed to attract several big companies, such as FTD, the floral delivery network, and Sanford L.P., the maker of Sharpie and Paper Mate pens, while providing only $28 million on special tax districts and other incentives there.

All told, in 2017, the most recent year examined by the study, Hoffman Estates had more than 15% percent of all its taxable property tied up in special tax districts — nearly all in the development area created for Sears. By comparison, Downers Grove had only 2.6% percent of its taxable land devoted to such districts. Most of the growth in tax revenue can only be used to make improvements within the boundaries of the districts.

In fact, none of the six suburbs studied spent close to what Hoffman Estates did on corporate breaks. None gambled on one single corporation. And yet all managed to economically prosper.

There is widespread agreement that Sears provided concrete benefits to Hoffman Estates. “We have a nice office park out there. We have housing around there. We still have hundreds of acres of undeveloped land,” McLeod said. It’s “been good basically for everybody.”

But Greg LeRoy, who runs Good Jobs First, a nonprofit that tracks corporate incentives, said politicians base their faith in tax breaks on two unproven assumptions.

First, they assume that a company would not relocate to a city without incentives. And second, that no development would have happened without the tax breaks.

There’s this “manna-from-heaven argument that you hear a lot of politicians spout about incentives,” said LeRoy, a frequent critic of using tax breaks to attract or retain companies. “You know: ‘We should be grateful for this. It wouldn’t have happened otherwise.’”

The truth is, Hoffman Estates and its neighbors were already primed for strong economic growth when the Sears deal was hashed out in 1989.

Hoffman Estates was part of a cluster of northwest suburbs that became known as the “Golden Corridor” because of the influx of corporate offices and manufacturing developments that arose after the Northwest Tollway opened in 1958.

The village had already proven an attractive site for several major health-related businesses, including Siemens Gammasonics. In 1987, Ameritech, the regional parent of five Bell telephone companies in the Midwest, chose the village for its corporate headquarters and more than 2,000 jobs.

But when Sears indicated interest in relocating in 1989, Illinois politicians wanted to keep the company in the state. And Hoffman Estates officials saw an economic catalyst that would fundamentally transform their town. A newsletter published by the village predicted that Sears’ arrival would be a “pot of gold,” bringing thousands of new jobs and scores of new businesses, and ultimately, filling the town’s coffers with tax riches.

Small town pride also played a role in the decision to bet big on Sears.

Hoffman Estates politicians saw Sears as a way to an identity, much in the way that Oak Brook, in the west suburbs, was closely linked with McDonald’s until it relocated to downtown Chicago in 2018. 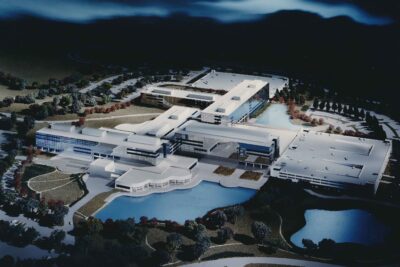 How We Reported on the $500 Million Sears Deal

To investigate the Sears deal, ProPublica and the Daily Herald reviewed thousands of pages of records, court filings and internal Sears documents. We also commissioned an economic study to examine the long-term effect of the tax deals.

“This puts Hoffman Estates on the map,” declared then-Mayor Michael O’Malley, who died in 2000.

The Sears deal centered on a nearly 800-acre special tax district created in 1989 on the village’s largely unoccupied western edge. As Sears built out the district, property values would rise and generate additional tax revenue that flowed into a fund which was used for the benefit of the district.

Sears moved into its new headquarters in the summer of 1992. Practically overnight, Sears became Hoffman Estates’ biggest employer and taxpayer. Construction was well underway, too, on the first office buildings of the company’s planned office park, Prairie Stone.

Unsurprisingly, the center’s study found clear signs of an impact on property values that lay within the Sears tax district, known as an economic development area, or EDA. As development took off, property values in Hoffman Estates soared by almost a third compared with growth in similar nearby suburbs.

But there was a trade-off. Once Sears established its headquarters in the district, the new tax revenue went to pay off infrastructure projects that benefited the company. That meant schools, parks, libraries, and other local taxing bodies got less tax revenue than they would have received if the district’s value had grown without the Sears deal in place.

Despite an economy that was booming in much of Illinois, the pace of growth at the Sears development had slowed by 1998. The grand vision of hundreds of new residents streaming into Hoffman Estates to work at Sears and buy homes never materialized.

Prairie Stone was not attracting many buyers or tenants. The tax district was not even generating enough property taxes to cover the village’s payments on the bonds — by terms of the agreement, Sears had to pick up the slack.

It remains unclear why, exactly, Illinois’ and Hoffman Estates’ investment into Sears did not pay off as well as expected. But experts have some theories.

The study found no evidence that growth in the special tax district spurred growth elsewhere in the village. This might be because Sears offered its employees on-campus amenities like restaurants, a beauty salon and a fitness center that kept them from needing to patronize local businesses.

“There were no positive spillover effects” from the special district, the study found.

Another reason for the lack of development, said Martire of the CTBA, is that the tax district could actually have discouraged other businesses. Real estate developers may not have wanted to compete with the Sears’ district’s tax breaks and infrastructure benefits.

The glut of vacant land surrounding Sears’ special tax district lends support to this possibility. When Sears moved to the village 30 years ago, there was plenty of developable land available nearby — 1,700 acres remain today.

But the most obvious reason for the lack of growth in Hoffman Estates is that state and local officials made a big bet on one company. And then that company, Sears, failed.

“The public-sector crystal ball is not much better than anyone else’s crystal ball,” Martire said. “When you have the public sector betting on which businesses are going to be ahead of the market for the next 23 years, they’re going to bet wrong in most cases.”

On this, both critics and supporters of the Sears deal agree.

“It’s not uncommon as time goes by that trends and business change dramatically,” McLeod said. “Nothing is forever.”