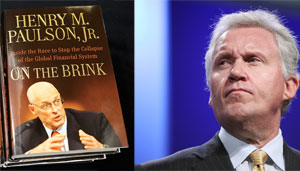 Hank Paulson’s memoir about the financial crisis, “On the Brink: Inside the Race to Stop the Collapse of the Global Financial System,” has become a best seller. But for his friend Jeff Immelt, the CEO of General Electric, the book has become a bit of a headache.

Last week, the company disclosed that the Securities and Exchange Commission is reviewing what the company said publicly about its liquidity in September 2008, as the crisis unfolded. Paulson’s book says Immelt told him on Sept. 8 and Sept. 15 that GE was having difficulties selling its short-term debt, or commercial paper, and that Immelt’s description of the problem alarmed him.

GE at the time was publicly reassuring investors that its financial situation was strong. This letter to investors on Sept. 14 states that GE’s commercial paper programs “remain robust.”

With our publishing partner The Washington Post, we disclosed the differences between the Paulson account and GE’s public statements back in February, shortly after the book was published. Immelt, in a statement for that article, said he “does not believe” he and Paulson discussed problems with GE’s commercial paper program during their September discussions.

The company also said all its disclosures from the relevant time period were accurate, a point that GE spokeswoman Anne Eisele repeated last week in confirming the company is cooperating with an SEC request for records. Eisele declined to answer a question about whether Immelt or the company has requested that Paulson’s publisher correct the account of the conversations in subsequent editions. Update (4/19): "I do not know of any request from either GE or Jeff Immelt to make any correction about pertinent material relating to them in the pages," Rick Wolff, the book’s editor, said Monday in an e-mail.

Paulson’s account is based on his recollection of his conversations. There appears to be no documentary evidence, at least in government files, of what transpired; the Department of the Treasury told ProPublica, in response to a Freedom of Information Act request, it had no records about the conversations.

In his book Paulson also explained that he helped GE Capital, the company’s massive finance arm, get into a government rescue program for which it initially was ineligible. The program insured bank debts and was run by the Federal Deposit Insurance Corporation. According to his book, Paulson went to bat for the company after Immelt told him in October 2008 that, “We need help.”

GE Capital went on to become the largest user of the program, issuing more than $70 billion in commercial paper and other government-backed debt.

Last week, the Government Accountability Office raised questions about the legal basis for the FDIC’s guarantee program, which relied on a previously unused provision in a 1991 banking law.

The GAO said the government’s interpretation of the 1991 provision “raises novel legal and policy issues.” Among them is whether the statute was meant to be so broadly applied and to provide “direct assistance to institutions that had never before received such relief.”

To help sort some of this out, here is our timeline of events that took place before GE was allowed to participate in the program.

Editor’s Note: A Review of Criticisms of a ProPublica-Vanity Fair Story on a COVID Origins Report