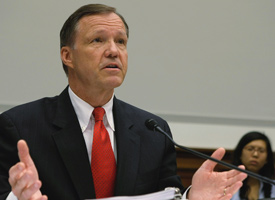 Yesterday, we ran through the reasons why the SEC might have missed Bernard Madoff’s long-running Ponzi scheme. SEC Chair Christopher Cox agrees that the SEC fell down on the job.

"I am gravely concerned by the apparent multiple failures over at least a decade to thoroughly investigate these allegations or at any point to seek formal authority to pursue them," he said in a statement last night. "Credible and specific allegations regarding Mr. Madoff’s financial wrongdoing, going back to at least 1999, were repeatedly brought to the attention of SEC staff," but an investigation was never launched.

He says the SEC needs to find out what went wrong, so he's tapped the SEC’s inspector general to launch an investigation of "the past allegations regarding Mr. Madoff and his firm and the reasons they were not found credible" -- which will include a look at whether SEC staff was too close to the Madoff family and firm. Recent reports have flagged the fact that Madoff's niece married a former SEC enforcement official.

The SEC inspector general has already delivered some eye-opening reports this year, including one detailing the SEC's failed oversight of Bear Stearns.