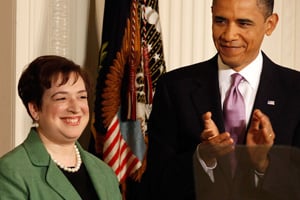 Before Elena Kagan was a Supreme Court nominee, she was Obama’s nominee for Solicitor General, a position she now holds.

And as an administration nominee, she was required to file a financial disclosure, and an ethics agreement – outlining potential conflicts of interest and what she plans to do about them -- which are both posted on our site for your perusal.

Much has been made, in particular, over the $10,000 “stipend” she received for being a member of the Goldman Sachs Global Markets Institute advisory council.

And while any connection to the toxic Goldman Sachs brand is likely to be political fodder during the confirmation process, the jury is out on how substantive the connection really is.

And, according to reports, the advisory board was more likely to discuss policy issues than ways to profit from complex securities.

In other news, we’re guessing that – if confirmed as Supreme Court Justice – Kagan will probably abandon her plan to return to Harvard after a two-year leave of absence.

See anythingwe missed? Flag it in the comments below -- or e-mail reporter Olga Pierce.