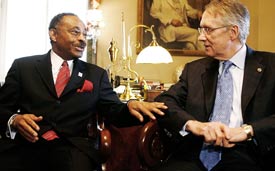 The stalemate is over.

After weeks of flip-flopping, Senate Democrats announced today that they’d let Roland Burris be seated as Barack Obama’s replacement in the Senate. Burris could take his seat this week now that Senate lawyers reviewed new paperwork he filed to become Illinois’ junior senator.

"As we had outlined to Mr. Burris, a path needed to be followed that respects the rules of the Senate," Sens. Harry Reid and Dick Durbin said in their statement. "We committed to Mr. Burris that once those requirements were satisfied, we would be able to proceed. We are pleased that everything is now in order."

Sen. Reid said last week that the absence of White's signature was a primary reason for denying Burris entry. At issue is what's known as Senate Rule II, which Reid said requires the secretary of state’s signature to validate an appointment.

But Senate rules apparently were meant to be broken (or at least flexible.) On Friday, the Illinois Supreme Court unanimously rejected Burris' claim that, under the law, White was required to certify his appointment.

Then White reaffirmed his decision not to sign off on the appointment, though he agreed to send Burris a signed certificate attesting that Blagojevich’s appointment letter is a "true and accurate copy" of what was registered by the secretary of state.

And that was close enough for Reid. Of course, it took him a while to get there.

First he turned Burris away from the Senate floor. The next day he indicated Burris would be seated if the Illinois Supreme Court sided with him. Then on Friday, Reid’s #2, Sen. Durbin, said the Senate wouldn’t seat Burris without White’s approval. After the back and forth, things appeared to be at a stalemate.

But that all changed Sunday when Durbin indicated Burris would take his seat sometime this week.

Burris threatened to take his case to federal court if he wasn’t seated. Despite opposition to his appointment, Burris referred to himself throughout the ordeal as "the junior senator from the State of Illinois."