Sen. Richard Burr, the powerful chairman of the Senate Intelligence Committee, requested a Senate Ethics Committee investigation into his stock trading, a day after ProPublica and the Center for Responsive Politics reported that he had dumped significant amounts of shares before the market crash triggered by the coronavirus outbreak.

Burr unloaded between $628,000 and $1.72 million of his holdings on Feb. 13 in 33 separate transactions, a significant portion of his total stock holdings. The sales came soon after he offered public assurances that the government was ready to battle the coronavirus.

On Twitter Friday morning, Burr defended the sell-off. “I relied solely on public news reports to guide my decision regarding the sale of stocks on February 13,” he said. “Specifically, I closely followed CNBC’s daily health and science reporting out of its Asia bureaus at the time.” He asked for the ethics committee to “open a complete review of the matter with full transparency.”

The ethics committee can recommend disciplinary action against lawmakers and refer potentially criminal violations to law enforcement. But it has been criticized for being too lax. It is illegal for members of Congress to trade shares on non-public information they gather in the course of their work. But cases are rare because proving that a politician relied on such non-public information is difficult.

As the head of the intelligence committee, Burr, a North Carolina Republican, has access to the government’s most highly classified information about threats to America’s security. His committee was receiving daily coronavirus briefings around this time, according to a Reuters story.

A week after Burr’s sales, the stock market began a sharp decline and has lost about 30% since.

After the story published, Burr faced a firestorm of criticism from both sides of the aisle. Former Obama administration officials along with prominent Trump allies blasted Burr’s stock sales. Calls for his resignation came from both ends of the political spectrum, including Rep. Alexandria Ocasio-Cortez, D-N.Y., and the Fox News host Tucker Carlson.

Thom Tillis, North Carolina’s junior senator, said on Friday that a review by the ethics committee was warranted. “Given the circumstances, Senator Burr owes North Carolinians an explanation,” Tillis, a Republican, wrote.

Throughout the day Thursday, news outlets reported instances of other lawmakers who also sold off stock before the market tanked.

The Daily Beast reported that Kelly Loeffler, a Georgia Republican who took office this year, sold off stocks jointly owned with her husband worth between $1.2 million and $3.1 million in the weeks after senators received a private briefing on the coronavirus from the Trump administration. Loeffler’s husband is the chairman of the New York Stock Exchange. In response, Loeffler posted on Twitter early on Friday morning that “this is a ridiculous and baseless attack. I do not make investment decisions for my portfolio. Investment decisions are made by multiple third-party advisors without my or my husband’s knowledge or involvement.”

Other senators who sold off stocks this year include Jim Inhofe, the Oklahoma Republican who chairs the Armed Services Committee. Reports with the Senate show that Inhofe sold shares worth between $380,000 and $830,000 both before and after the briefing, which Inhofe did not attend. “I do not have any involvement in my investment decisions,” Inhofe posted on Twitter on Friday. “In December 2018, shortly after becoming chairman of the Senate Armed Services Committee, I instructed my financial advisor to move me out of all stocks and into mutual funds to avoid any appearance of controversy.” 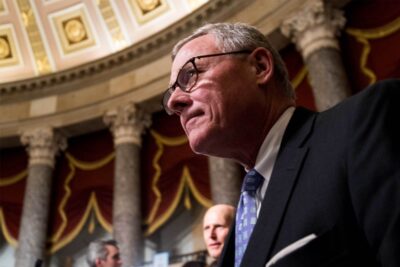 Reports of sales by other senators surfaced as well. But those sales were less anomalous or noteworthy. Sen. Ron Johnson, a Wisconsin Republican, reported selling shares in a private firm he ran, Pacur LLC, worth between $5 million and $25 million. That transaction took place on March 2. The deal had apparently been in the works for some time and had been announced on Feb. 11.

In another case generating headlines, filings also show large sales reported by Sen. Dianne Feinstein, the California Democrat who serves on the Intelligence Committee alongside Burr. But they only involved one stock. Feinstein’s husband, Richard Blum, sold off shares in Allogene Therapeutics Inc. worth between $1.5 million and $6 million on Jan. 31 and Feb. 18. Blum is a frequent stock trader, according to Feinstein’s financial disclosures, and appears to have taken a loss on at least a portion of the shares he sold.

Asked about senators making stock trades at a press conference Friday, President Trump said “I’m not aware of it, I saw some names.”

He added, “I find them to all be very honorable people, that’s all I know and they said they did nothing wrong.” The only senator he addressed by name was Dianne Feinstein, and complained that reporters at the press conference were not noting her stock trades.

By the standards of the Senate, Burr is not particularly wealthy: Roll Call estimated his net worth at $1.7 million in 2018, indicating that the February sales significantly shaped his financial fortunes and spared him from some of the pain that many Americans are now facing.

He was one of the authors of the Pandemic and All-Hazards Preparedness Act, which shapes the nation’s response to public health threats like the coronavirus. Burr’s office did not respond to requests for comment about what sort of briefing materials, if any, on the coronavirus threat Burr may have seen as chair of the intelligence committee before his selling spree.

According to NPR, Burr had given a VIP group at an exclusive social club a much more gloomy preview of the economic impact of the coronavirus than what he had told the public, saying it might close schools and impede business travel. In response, Burr said the NPR report was misleading.

Burr’s public comments had been considerably more positive. In a Feb. 7 op-ed that he co-authored with another senator, he assured the public that “the United States today is better prepared than ever before to face emerging public health threats, like the coronavirus.” He wrote, “No matter the outbreak or threat, Congress and the federal government have been vigilant in identifying gaps in its readiness efforts and improving its response capabilities.”

Members of Congress are required by law to disclose their securities transactions.

Burr was one of just three senators who in 2012 opposed the bill that explicitly barred lawmakers and their staff from using nonpublic information for trades and required regular disclosure of those trades. In opposing the bill, Burr argued at the time that insider trading laws already applied to members of Congress. President Barack Obama signed the bill, known as the STOCK Act, that year.

Stock transactions of lawmakers are reported in ranges. Burr’s Feb. 13 selling spree was his largest stock selling day of at least the past 14 months, according to a ProPublica review of Senate records. Unlike his typical disclosure reports, which are a mix of sales and purchases, all of the transactions were sales.

His biggest sales included companies that are among the most vulnerable to an economic slowdown. He dumped up to $150,000 worth of shares of Wyndham Hotels and Resorts, a chain based in the United States that has lost two-thirds of its value. And he sold up to $100,000 of shares of Extended Stay America, an economy hospitality chain. Shares of that company are now worth less than half of what they did at the time Burr sold.

The assets come from accounts that are held by Burr, belong to his spouse or are jointly held.