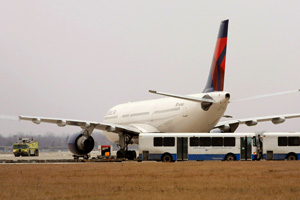 The intelligence failures leading up to the Christmas Day bomb attempt aboard Northwest Flight 253 to Detroit have been well documented (and acknowledged) since then, but today the Detroit Free Press takes a look at the series of missteps that immediately followed the botched attack.

The biggest blunder appears to have been the decision to head directly to the terminal upon landing, rather than to an isolated area. Richard Bloom, director of terrorism, intelligence and security at Embry-Riddle Aeronautical University in Prescott, Ariz., called the move "preposterous."

The FAA recommends that planes suspected of carrying bombs be moved as far away from the airport and other planes as possible but gives ultimate discretion to the pilot, crew and airport. Glen Winn, former head of United Airlines security, said that, in general, "you just don't take it to a terminal."

The plane was eventually moved to an isolated area nearly two hours after landing, but only after a passenger noted that the suspect had left carry-on luggage in the overhead. (See the Free Press' detailed timeline.)

Records reviewed by the Free Press show other errors, too: "that passengers were allowed off the plane without being searched, and that luggage was unloaded from the belly of the plane, despite the fact that no search for other explosives had been completed."

Many of these missteps can be traced to the lack of communication between the plane and the airport, the Free Press reports. The pilots, who initially told airport authorities that a passenger had lit firecrackers onboard, apparently never revised their story, even though at least one flight attendant knew that it had been a bomb attempt.

A spokeswoman for Delta Airlines, which merged with Northwest, defended the decision to head directly to the gate "for the boarding of authorities and deplaning of the passengers," but Delta officials refused to discuss the cockpit's communications during the flight.

Airport spokesman Michael Conway told the Free Press that the ground crews' response was appropriate based on the information available to them.