Three days after Hurricane Katrina turned New Orleans into a ghost town, somebody shot Donnell Herrington twice in Algiers Point, ripping a hole in his throat.

Herrington, who is African-American, says he was ambushed by a group of armed white men who attacked without warning or provocation. He barely survived the shooting, which shredded his internal jugular vein, a key vessel that transports blood from the brain to the heart. He believes the assault was racially motivated.

No one has ever been charged in the incident, but now, more than four years later, at least two figures have come forward with information implicating a neighborhood man in the attack. These two people linked Roland Bourgeois Jr. to the shooting in interviews with ProPublica, the Times-Picayune and PBS’ “Frontline.” 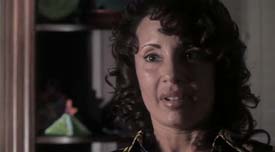 Terri Benjamin, who lived in the area, said she saw Bourgeois, 47, pledge to shoot anybody with skin “darker than a brown paper bag” while clutching a shotgun. At one point, she said, he held up the blood-drenched baseball cap of a man who’d just been shot.

Bourgeois’ mother, Pam Pitre, said her son did fire his shotgun at an African-American man that day in Algiers Point, and acknowledged that he kept the man’s hat. Pitre, who insists her son “is not a racist,” said Bourgeois was accompanied by another man who also fired shots.

Herrington, whose story closely tracks with the accounts of Pitre and Benjamin, lost his navy blue baseball cap when he was shot. After viewing a photo of Bourgeois, Herrington identified the man as one of his attackers. Bourgeois, he said, “definitely was one of the guys I saw that day. … I definitely remember him. He was one of 'em.”

Bourgeois, who has not been charged with any crime, declined to be interviewed.

The Herrington shooting is the subject of an ongoing probe by U.S. Department of Justice attorneys and FBI agents, who are examining claims that white residents of Algiers Point attacked African-Americans in a spate of racially motivated violence in the days after Katrina tore through Louisiana. Over the past several months, federal prosecutors have questioned numerous witnesses about the alleged hate crimes in grand jury proceedings.

At the U.S. Department of Justice, spokesperson Xochitl Hinojosa said she couldn’t comment on the investigation.

So far, the hate crimes probe has been overshadowed by a sprawling federal investigation of the New Orleans Police Department, an effort that’s snared guilty pleas from three former officers for crimes committed in the aftermath of the storm. But the accounts of what transpired in Algiers Point may soon force the city to revisit another painful episode from those grim days.

‘I thought it was over’

The floodwaters that spilled over much of New Orleans didn’t touch Algiers Point.

Still, the catastrophe prompted the neighborhood’s residents – most of whom are white -- to take action. Within days, a band of 15 to 30 locals had taken up weapons, barricaded the streets with downed trees and debris, and begun regular patrols of the area. Residents say they were trying to keep their homes from being overrun by thieves and outlaws.

“There’s no black and white issue here,” said Clyde Price III, a white man who lived next door to Bourgeois for many years.

But others, including Malik Rahim, the co-founder of the activist group Common Ground Relief, who was in Algiers Point in the days after the storm, believe the neighborhood militia carried out a series of hate crimes, threatening and shooting black people who walked into the area.

Herrington said that the attack on him occurred on Sept. 1, 2005, as he strode toward the Algiers Point ferry terminal with his cousin, Marcel Alexander, and a friend, Chris Collins. 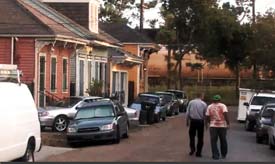 As part of a rescue mission called Operation Dunkirk, the U.S. Coast Guard had created a makeshift evacuation center at the terminal. Using an array of watercraft, sailors transported thousands of flood victims from St. Bernard Parish and East Bank neighborhoods to the ferry terminal; from there, they were bused out of town.

Herrington, 33, and his companions say they were aiming to get on one of those buses.

But as the trio approached the intersection of Pelican Avenue and Vallette Street, a white man pointed a shotgun at Herrington and, without saying a word, squeezed the trigger, according to Herrington. “I thought I was about to die,” he said. “I thought it was over.”

The first shotgun blast ripped into his throat, torso and arms. Somehow, Herrington got to his feet and began running. He remembers two more armed men joining the first gunman. As he tried to escape, he says, a second blast struck him in the back.

Both Alexander and Collins witnessed the shooting -- and both also suffered minor gunshot wounds. “I thought Donnell was dead,” recalled Alexander, who backs up his cousin’s account. “I thought that I would never see Donnell no more.”

Alexander, who was 17, said he and Collins were briefly taken prisoner by a group of about five armed white men, one of whom threatened to set them on fire. Eventually, though, the men let Alexander and Collins go.

Bleeding, Herrington staggered to the home of an African-American couple who drove him to West Jefferson Medical Center, where doctors discovered buckshot in his arms, chest, abdomen and back, X-ray reports show. A cluster of pellets had torn open the internal jugular vein along the right side of his throat, according to medical records and one of Herrington’s surgeons, Dr. Charles Thomas. At 3:43 p.m., he underwent surgery to repair the shredded vein.

Herrington is adamant that he and his companions did nothing to provoke the incidents. “We were just in the neighborhood for a few minutes,” he said. “We were just passing through.” The only way to the ferry terminal from his home, he noted, was through Algiers Point. 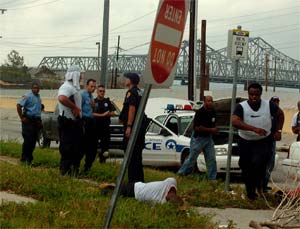 Over the course of several interviews, Herrington remembered one last detail about his ordeal: He’d been wearing a navy blue baseball cap bearing the logo of either the New York Yankees or the Detroit Tigers. During the scramble, he said, the hat must have fallen off his head.

As Terri Benjamin and her aunt, Eudith Rodney, walked along Pelican Avenue that day, the reverberating boom of gunfire echoed through the thick, humid air.

Fearful, the women began running toward the safety of Benjamin’s home. As they neared Vallette Street, they encountered a group of armed white men, Benjamin said in an interview.

Among the men, Benjamin recalled, was Roland Bourgeois Jr., who lived just two doors down on Vallette Street. Bourgeois was gripping a shotgun and celebrating.

“My neighbor was jumping up and down, hootin’ and hollerin’ like he was big-game hunting and he got the big one,” she said. “All of his friends were rallying him on, and they were cheering.”

A beefy character with a shaved head, Bourgeois screamed “I got one!” and boasted that he’d shot a “looter,” said Benjamin, who shared her story with a federal grand jury on March 25.

Before long, she said, another armed man -- someone Benjamin didn’t recognize -- showed up with news: The person Bourgeois had shot was wounded but alive a few blocks away.

According to Benjamin, Bourgeois said, “I’m gonna kill that nigger,” and ran, barefoot and shirtless, down the street before turning and jogging out of view.

Bourgeois ran back to join the group of gun-equipped men standing in the street, she said. “He came back with a baseball cap that had blood on it. And I knew there was blood on the cap because it ran onto his arm. And he brandished the cap for all of his friends,” Benjamin said. “Everybody cheered. They were happy for him.”

Benjamin, who is ethnically mixed -- white, Latino and African-American -- was waiting for an uncle and cousin, both of whom are African-American, to come to her house. She feared Bourgeois and the other men would attack her relatives.

“I went to him and asked him to spare their lives,” Benjamin remembered. “He said, ‘Darlin’, anything coming up that street darker than a brown paper bag is gettin’ shot.’"

Traumatized, Benjamin moved out of the state after Katrina, but just weeks ago, she made two trips to the neighborhood, accompanied by a federal prosecutor and an FBI agent who asked her to retrace her steps.

The investigators, she said, were interested in Bourgeois. “They asked me specifically about him,” Benjamin said. Assistant U.S. Attorney Forrest Christian also questioned her about a “sidekick” of Bourgeois, she said.

Bourgeois may be guilty of poor judgment, but he didn’t commit a hate crime, according to his mother, Pam Pitre.

In a recent interview, she explained her understanding of the shooting her son participated in. Pitre said she’s discussed the shooting in detail with Bourgeois, and testified before the grand jury about it.

In Pitre’s telling, Bourgeois encountered three dangerous and “arrogant” African-American males who’d been trying to break into parked cars, Pitre said. “He said they looked like gang members to him,” she recalled.

After the trio of black men tried to move one of the barricades blocking the street, Bourgeois and another man began shooting at them, said Pitre. “Both men had guns. Both fired,” she said, adding that she didn’t know the name of the other shooter.

According to Pitre, the shots were meant to “scare,” not to kill.

When the gunfire stopped, Bourgeois “picked up the baseball cap” that had fallen from the head of one of the shooting victims, according Pitre, who said her son kept the hat until she convinced him to get rid of it.

Pitre says the shooting had nothing to do with skin color. “If they want to say it was a bad decision — yes, it was. But it wasn’t a hate crime,” she said. “He is not a racist — and that’s what bothers me more than anything else.”

Bourgeois was terrified by the lawlessness that followed the storm and flooding, she said. He was threatened by a group of African-Americans, she said, and “pelted with bottles” in the days before the shooting occurred.

The only reason the matter came to the attention of federal authorities, Pitre maintained, is that “this man Roland shot survived and is telling his tale.”

Bourgeois’ family has owned property in Algiers Point for decades, and around the neighborhood he’s known as a dog lover. Aside from a 1992 arrest for possession of marijuana, he has no criminal record in Orleans Parish.

Civil court records show Bourgeois has at least two children. He is now residing with his mother in Mississippi.

Price, his former neighbor, said Bourgeois has been unfairly tarred as a racist. “Everyone paints a bad picture of him because he’s a big, white bald dude and a gun fanatic,” said Price. “They think it was all racism. But it wasn’t.”

Still, Price acknowledged, Bourgeois has a habit of referring to African-Americans as “niggers.”

Over the past year, FBI agents have interviewed Herrington numerous times and have canvassed the neighborhood, going door-to-door in an effort to locate witnesses to the shooting. One local who was questioned by agents said they were seeking information about approximately 30 Algiers Point residents.

At this point, however, it’s unclear whether the probe will lead to criminal indictments.

Herrington continues to feel anger about what happened to him.

“To me, it was a hate crime,” he said. “It was a racial statement.” He thinks if his skin was a different hue — if he’d been a “white guy” striding through the neighborhood, en route to the ferry terminal — “it wouldn’t have happened to me.”

Editor's note:The Roland Bourgeois Jr. in this story should not be confused with the Metairie, La., physician of the same name.