After a ProPublica investigation into the death of a teenager in Border Patrol custody, House Democrats are ramping up pressure on the Trump administration to explain how six migrant children died after entering the U.S.

“I find it appalling that (Customs and Border Protection) has still not taken responsibility for the deaths of children in their care,” said Rep. Bennie Thompson, D-Miss., the chairman of the House Homeland Security Committee.

Thompson said that while some of the children’s deaths may not have been preventable, Customs and Border Protection, the federal agency that first deals with children who cross the border, seems “all too quick to pat themselves on the back for their handling of children last year. These deaths happened under their watch. I remain skeptical that real changes have been made.”

The Homeland Security border subcommittee will hold a hearing Tuesday to examine the administration’s efforts to treat sick migrant children. The six who died in government custody between September 2018 and May 2019 were the first such deaths in a decade.

ProPublica’s December investigation into the death of Carlos Gregorio Hernandez Vasquez, a 16-year-old Guatemalan boy who died in a South Texas Border Patrol cell, raised concerns about actions by Border Patrol agents and contract medical personnel and whether the agency was truthful about the circumstances of the teenager’s death. The boy died on the floor of his cell on May 20, and a surveillance video obtained by ProPublica showed he was left alone for hours as his illness worsened.

Carlos was the last of six children to die. Three children died from flu-related complications, one died of a massive bacterial infection and two died from chronic conditions they had before crossing the border, according to autopsies and other medical reports.

A spokesperson for CBP, the Border Patrol’s parent agency, said the department has made sweeping changes at the border in the past year. About 300 contract medical personnel work any given day at 40 border stations, up from 20 trained medical providers in December 2018, the spokesperson said.

The Department of Homeland Security Office of Inspector General in late December issued one-page findings on the December 2018 deaths of two Guatemalan children. Investigators “found no misconduct or malfeasance by DHS personnel” in the deaths of Jakelin Caal Maquin, 7, and Felipe Gomez Alonzo, 8.

The inspector general rejected Thompson’s criticism, saying the agency has fully briefed his staff on the investigations.

A committee spokesman said the inspector general’s office has declined to testify at Tuesday’s hearing.

The DHS inspector general continues to investigate Carlos’ death. He died of flu complications in a cell in Weslaco, Texas, a week after crossing the border.

The DHS inspector general is not investigating the deaths of three children who died after being released from Border Patrol custody, a CBP spokesperson said.

Two of those children — a 10-year-old Salvadoran girl in September 2018 and a 16-year-old Guatemalan boy in April 2019 — died after being sent from Border Patrol to the Office of Refugee Resettlement, which is part of the Department of Health and Human Services. No autopsies were conducted, but the cause of death for each was listed as a chronic condition that predated their arrival.

An HHS spokesman didn’t respond to questions about whether that agency was investigating the deaths of those two children.

The sixth death involved a 2-year-old Guatemalan boy who died in El Paso in May, several weeks after he and his mother crossed the border. Both were released from custody while he was in the hospital. An autopsy found that the boy, Wilmer Josue Ramirez Vasquez, died of the flu and other respiratory and intestinal infections.

Four of the six children who died were taken into custody by the Border Patrol’s El Paso sector. Rep. Veronica Escobar, an El Paso Democrat, said Trump administration officials have refused to provide her with information on the deaths of the migrant children, citing the need to protect internal investigations.

Escobar in July asked DHS and CBP to preserve videos of border detention facilities since December 2018 and asked for copies of videos of the detention of children and adults who died in custody. In November, Acting CBP Commissioner Mark Morgan sent a letter to Escobar telling her that videos are routinely erased.

Morgan said the agency’s policy “does not specifically outline video recording standards.” He said that because of limited storage capacity, the agencies’ video systems overwrite recordings every 30 to 60 days.

Morgan said videos are preserved for investigations “where a death in custody occurred in a CBP controlled space.” Carlos was the only child to die in a CBP facility; the others died after being transferred to outside medical facilities.

“It’s disappointing, obviously, that my request that the videos be preserved isn’t being followed,” Escobar said. She added that other records of the deaths haven’t been provided by the Trump administration to Congress, which may have to use its subpoena power to obtain them.

ProPublica obtained video of Carlos’ death through a request under Texas open records laws to the Weslaco Police Department, which briefly investigated the boy’s death. CBP provided video of Carlos’ cell from the morning of his death to Weslaco police, though the video included an unexplained gap of more than four hours.

On Dec. 30, CBP released a new medical directive on the care of migrants in custody. The policy replaces an interim plan created in January 2019 in the wake of the deaths of Jakeline and Felipe.

“We take our responsibility to provide adequate health care to everyone in our custody extremely seriously and will continue to make adjustments and improvements as the situation changes,” the agency said in a statement.

But a leading public health expert said the medical directive is so vague that it is essentially meaningless.

“What they’re saying in the press statement makes it sound like things are moving and going on, but in the official document there’s nothing there to be able to parse out to say what are they truly going to do,” said Dr. Paul Spiegel, director of the Center for Humanitarian Health at Johns Hopkins University. 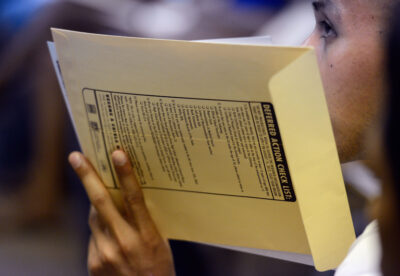 Trump promised that information from DACA applications would not be sent to deportation agents. But internal emails show that ICE can access databases where that information is kept — and DHS decided not to tell Congress.

The directive calls for agents to tell migrants to report if they’re feeling sick. In a second phase, Border Patrol agents would provide a health interview to all migrants under 18. In a third phase, if funding is available, all children under 12 would get a medical assessment.

In the fiscal year 2020 funding bill for DHS that passed in December, Congress directed CBP to develop a medical policy that included clear metrics to determine if detention conditions were creating a public health crisis. The “explanatory statement” for the appropriations bill also calls on CBP to develop a “peer review process for deaths in custody.” The Dec. 30 medical directive doesn’t mention metrics or a review process when migrants die in custody.

The CBP spokesperson said the agency “is working with DHS headquarters, multiple federal agencies and other stakeholders to address the items noted in the FY20 appropriations bill.”