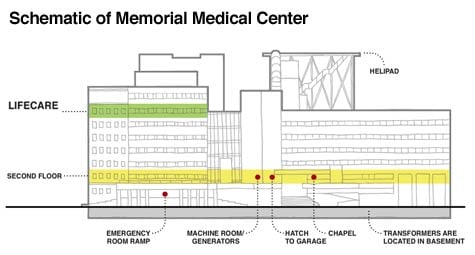 Slate's Josh Levin has a thoughtful story today following up on our exploration of post-Katrina deaths at  Memorial Medical Center in New Orleans. Our story, co-published with the New York Times Magazine, revealed that at least 17 patients at the hospital died in the final hours of patient evacuation after all were injected with morphine and/or the sedative midazolam.

Levin points many of those who died were patients of a separate long term acute care hospital, LifeCare Hospitals of New Orleans, that leased the 7th floor of Memorial. He argues that "this separation of authority and personnel caused chaos in the days after Katrina and probably contributed to the death toll at the hospital."

We thought we would answer a couple of questions Levin raised about the relationship between the two hospitals and the physicians present at the facilities.

Levin cites one expert asking whether the "LifeCare facility really was a separately certified hospital from Memorial Medical Center."

Yes, LifeCare was a separately licensed hospital. Both were accredited by the Joint Commission on Accreditation of Healthcare Organizations (now known as The Joint Commission). While LifeCare had its own administrators, nurses, pharmacists and supply chain, the two hospitals did share food and linen services.As Levin suggested is typical, some patients at LifeCare had in fact been discharged from Memorial.

Levin also writes, "It is not clear whether a dedicated LifeCare physician was present in the Long Term Care Hospital" for Katrina.

At least seven physicians present during the storm were fully privileged to treat and admit patients to LifeCare, according to Rosemary Plorin, a spokesperson for LifeCare. Plorin said LifeCare also had its own 44 licensed clinical professionals (e.g. nurses, respiratory therapists) on hand for the storm in addition to administrators and other non-clinical staff who were present.

There were 55 long-term acute care patients present in the 82-bed LifeCare facility when Katrina came ashore. Nineteen of them, along with their nurses, therapists and other staff, had been relocated to Memorial before the storm from a low-lying LifeCare facility east of New Orleans that was thought to be particularly vulnerable to flooding.

LifeCare's medical director, Dr. John Wise, who had stayed at the hospital for previous hurricanes, was not present during Katrina. He had notified the company in advance and arranged coverage for his patients. Some patients' family members as well as doctors I interviewed questioned whether his presence might have improved the outcomes for LifeCare patients. Memorial's physician chief of staff also happened to be out of town when Katrina struck.

Levin's story also examines the intriguing history of long-term acute care hospitals. Levin quotes a 2006 statement by the director of the government's Center for Medicare Management who said that long-term care hospitals were "the highest paid hospitals in the Medicare program, with average Medicare margins of almost 12 percent." Interestingly, those numbers have dropped dramatically in recent years. The margin for 2007 was 4.6 percent and this year's projected margin is 0.5 percent, according to a report by the Medicare Payment Advisory Commission, an independent Congressional agency. (See page. 21.)