And almost every time they did in 2015, Roberts billed Medicare for the most complex, and most expensive, type of office visit — one that typically takes 40 minutes and for which Medicare reimbursed him an average of $94. He billed for 4,765 such high-level visits that year, according to federal data, more than any other doctor in the country. And for that, he collected nearly $450,000 from Medicare.

For years, internal government watchdogs have been warning the federal Medicare program that some doctors were overcharging for office visits. And for years, federal health officials have been promising to focus on the problem.

But a new ProPublica analysis shows very little has changed since we first wrote about the issue in 2014. ProPublica found that 1,825 health professionals, including Roberts, billed Medicare for the most expensive type of office visits for established patients at least 90 percent of the time in 2015. That was almost the same as the 1,807 that we found based on 2012 data. Some physicians that were billing Medicare this way in 2012 still were in 2015, we found.

Office visits are a staple of medicine. In 2016, Medicare paid for more than 227 million of them at a cost of $13.2 billion (including Medicare outlays and patient copayments). They are far from the most expensive services that Medicare provides, but they are ubiquitous.

While it’s possible that some physicians only treat the sickest patients who require the highest level office visits, “I don’t think it’s very probable,” said Dwayne Grant, regional inspector general for evaluation and inspections for the U.S. Department of Health and Human Services in Atlanta. Grant’s team produced reports in 2012 and 2014 that said Medicare needed to do more to address improper billing.

“We continue to believe that focusing on these high-coding physicians is going to improve oversight, reduce overpayments and really serve as a deterrent effect,” he said.

Among the 1,825 physicians who billed most often for complex office visits was Dr. Jose Prieto, an internist in Hialeah, Florida. He billed for 721 office visits in 2015, all of them at the highest level, Medicare data show. Medicare revoked Prieto’s ability to participate in the program in December 2016 for “falsified information,” according to data provided under the Freedom of Information Act.

Prieto did not respond to a phone call and email seeking comment. A woman who returned a call placed to his office said Prieto is an infectious disease doctor who treats patients with HIV and routinely spends 45 minutes with each patient. The woman disputed that Prieto exclusively bills for the highest level office visits, as Medicare data shows. “He bills for the time he spends with his patients,” she said.

Another is Dr. James Beale, an orthopedic surgeon in Warren, Michigan. All 1,150 of his Medicare office visits were billed at the highest level in 2015. Beale has been disciplined three times by Michigan’s medical board, most recently in May 2016 when he was suspended for failing to respond to a 2015 board complaint that he prescribed controlled substances for patients without adequate justification. Beale also extensively billed Medicare for psychotherapy services in 2015. He could not be reached for comment.

Also on the list is Dr. Rand Ritchie, a Pismo Beach, California, psychiatrist. He billed 1,475 visits at the highest level, or 97 percent of his Medicare office visits, in 2015. The California medical board has disciplined Ritchie twice for alcohol abuse and multiple convictions for driving under the influence of alcohol. He completed probation most recently in 2014 and currently has an unrestricted license.

Ritchie’s office manager, Darryl Schumacher, who handles billing for the practice, said Ritchie had started accepting Medicare around 2015 because no other psychiatrists in private practice in the area did so. “He was taking on many new patients and the complexity of some of these patients, because they had either gone without treatment for many years or had gone without a psychiatrist, was pretty difficult at the beginning,” Schumacher said.

Schumacher also said that no one from Medicare had contacted the practice to ask about Ritchie’s numbers and that questions from ProPublica were the first indication that his billing pattern was unlike that of his peers. As for his discipline, Schumacher said Ritchie fulfilled the requirements of his probation and is once again board certified in psychiatry.

Asked for comment, a spokeswoman for the Centers for Medicare and Medicaid Services said the agency is exploring how to make changes to its billing rules for office visits to reduce the burden on doctors and better reflect the way medicine is practiced and care is coordinated.

In a notice in the Federal Register in November, CMS said the guidelines governing how health professionals bill for office visits, more formally called Evaluation and Management visits, date to 1995 and 1997. CMS said the process for updating them could take several years.

As it stands now, doctors and their staffs decide how to bill for a patient visit based on a host of factors, including how thoroughly they review a patient’s medical history, the intensity of the physical exam and how complicated the medical decision-making was. The coding system developed by the American Medical Association gives doctors five options.

An uncomplicated visit, typically of short duration and which may not require a physician, is coded a “1”; a visit that involves more intense examination and often consumes more time is coded a “5.” The most common codes for visits are in the middle, “3” and “4.” 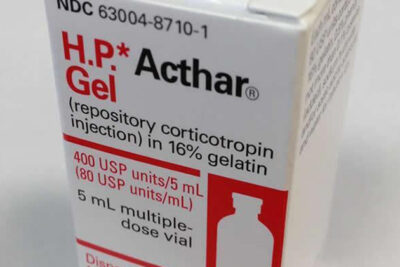 The Obscure Drug With a Growing Medicare Tab

Experts question the effectiveness of H.P. Acthar Gel, a drug made from pigs’ pituitary glands. Yet it cost Medicare more than $141 million in 2012, up from $7 million in 2008.

Most health professionals had a tiny percentage, if any, visits billed at level 5, but more than 1,250 billed only at the highest level in 2015, ProPublica found. Another 570 billed that way more than 90 percent of the time. That was very similar to what we found three years earlier.

Cyndee Weston, executive director of the American Medical Billing Association, an industry trade group, said such numbers raise red flags. “It’s not likely that every patient that comes to a doctor’s office is a level 5,” she said.

The doctors who billed at the top level in 2015 were not all the same as those who did so in 2012. Of the 1,825, 650 were on the list in both years. Another 536 billed for a lesser share of visits at the highest level in 2012. And the remaining health providers did not bill Medicare in 2012 for office visits involving at least 11 patients.

For some doctors, the shift was jarring.

In 2012, Roberts, the Evergreen, Alabama, family doctor, never billed for high-level office visits. He billed Medicare 4,681 times for level 3 visits, for which Medicare paid him an average of $43.57, less than half as much as he received per visit in 2015.

Weston said it’s “disappointing” that the same problems identified years ago appear to remain today. Some of what’s happening, she said, is related to electronic medical record systems that assign billing codes based on the computer boxes doctors click during office visits.

“Those programs tend to upcode,” meaning to bill at a higher level than justified, Weston said. If doctors copy and paste phrases about a patient’s condition and their electronic medical record automatically decides how to bill for the visit, “that is worrisome.”

How We Did This Analysis

For this story, ProPublica analyzed provider billing patterns for standard office visits in Medicare. We focused on those for established patients who had been seen at least one time by the provider previously. These are among the most common services performed in the program.

We used data released by the Centers for Medicare and Medicaid Services showing the services provided by and payments made to providers in Medicare's Part B program in 2015. Medicare redacted data on services when a provider billed for a service for fewer than 11 patients.

More than 490,000 providers billed the program for standard office visits for at least 11 patients in 2015.

Office visits are coded using the Current Procedural Terminology system devised by the American Medical Association and used by Medicare. The severity of each visit depends on three criteria: the thoroughness of the review of a patient's medical history, the comprehensiveness of the physical exam and the complexity of medical decision-making involved.

To protect against variation hidden by redactions, we focused on the nearly 364,000 providers who billed for at least 100 standard visits in 2015.