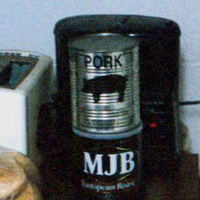 After scouring hundreds of contracting records under the economic stimulus package, we've finally found it -- PORK!

No, not the kind that Congress puts in a barrel.

The kind that workers in Plainview, Minn., put in a can.

Amid the first 800 federal stimulus contracts is $16.8 million to Lakeside Foods for "canned pork."

We made our find while running background checks on companies getting stimulus money. It's part of our effort to watchdog the stimulus with the help of the ProPublica Reporting Network.

The "canned pork" is funded by a $150 million Agriculture Department program to deliver meat, fruit and other items to food banks, which have been struggling to meet the surging demand in the economic downturn.

And in case you were wondering: Canned pork is not Spam.

The production will employ 53 people, he said.

The money for food banks was added by Congress at the request of Rep. Rosa DeLauro, D-Conn., after advocates from local communities testified about a rush of families needing food.

Demand at food banks was up 30 percent in December, the most recent month available, said Ross Fraser, spokesman for Feeding America, a charity that supports more than 200 food banks.

To date, the Agriculture Department has received orders from states for $13.5 million in peanut products, $15.1 million in canned fruit, $15.8 million in poultry, $24.9 million in cheese and $28.3 million in pork, said Jean Daniel, a spokeswoman for the department's Food and Nutrition Service.

"If you see the faces of hunger," she said, "I think Americans would feel so much better to know that it's going to food for people who are struggling. And oftentimes it's children, who are innocent and can't fend for themselves."