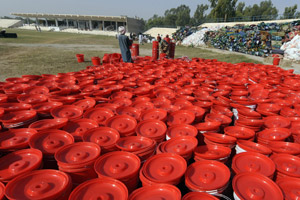 The State Department has responded to criticisms over how it is going to spend and oversee $7.5 billion in new civilian aid for Pakistan, outlined in a plan that ProPublica reported on yesterday.

That plan, which is outlined in a report (PDF) the department sent to Congress last week, calls for shifting spending on U.S. aid projects away from American contractors and nongovernmental organizations and toward their Pakistani counterparts, as well as relying more on Pakistani public accounting firms to monitor that money. Development workers have raised concerns that the policy shift could make American taxpayer money more vulnerable to waste and abuse.

Robin Raphel, the U.S. coordinator for economic and development assistance in Pakistan, told ProPublica today that the key point of the plan is to foster lasting development in Pakistan and help strengthen local institutions.

"When you don't have Pakistani buy-in, input, ownership of these programs, you might think you're gaining something fast in the short term, but it isn't sustainable," said Raphel. The emphasis on strengthening institutions in Pakistan may include allowing the Pakistani government to run the bidding process for some U.S.-funded programs. Instead of the U.S. Agency for International Development choosing the Pakistani groups that will provide goods and services for the programs it funds, Raphel said that some of those contracts may go through the Pakistani procurement process, with American oversight.

A senior administration official, who asked not to be identified, expressed frustration over the criticism of Pakistani organizations. "There's a widespread perception that every Pakistani you run into is corrupt," said the official. "I find myself a little impatient with that assumption. Pakistanis are very capable of doing this kind of work. I think it's very patronizing."