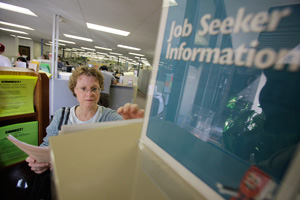 Twenty states now owe a combined $15 billion to the federal government because their unemployment insurance trust funds have run dry.

The latest casualty is Minnesota, which has been forced to borrow $21 million so far, after paying off a smaller loan earlier this year.

Because of a historical compromise, the U.S. has 53 unemployment insurance systems (the states, D.C., Puerto Rico and the Virgin Islands). Federal law gives each program wide latitude to determine benefits and funding, and while some states did a good job of squirreling away funding in case of recession, other states maintained dangerously low reserves.

To pay back the loans, states will have to raise taxes on employers, lower benefits for workers -- or both -- just about the time the economy is predicted to be recovering from the Great Recession. The stimulus bill gives states until 2011 before they have to start paying interest, but many states will not be able to pay their loans back by then and thus face hundreds of millions of dollars of interest payments.

Is your state’s unemployment insurance system in danger?