This story was co-published with USA Today and will appear in that newspaper on Tuesday, Sept. 8, 2009. 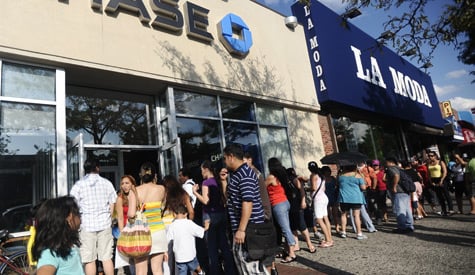 Word of the money spread quickly.

New York state had put hundreds of dollars in federal stimulus money into food stamp accounts, and if it wasn't withdrawn by 4 p.m., 9 p.m., midnight -- depending on the version of the rumor -- it would disappear. So on a sultry August day, lines stretched at ATMs all over the state, a literal run on the bank.

The surprise cash -- which was real, even though the deadlines weren't -- came from a little-known stimulus fund that economists say would directly help people hurt by the recession and be extremely effective at stimulating the economy.

The $5 billion emergency fund for needy families can be used to immediately create jobs for the unemployed, pay rent for families facing eviction, even repair someone's car so they can get to work.

But many states aren't taking advantage of the windfall because state officials say they can't afford the requirement that they put up 20 percent of the costs. Six months into the stimulus, only 27 states have applied for the money.

In New York, Gov. David Paterson came up with a creative solution that has been praised by economists and advocates for the poor. Unable to make the 20 percent match on its own, the state teamed up with philanthropist George Soros, whose Open Society Institute contributed $35 million so the state could access $140 million in stimulus money.

The money went straight to low-income families, who received $200 per child for back-to-school supplies and clothes. About 800,000 children were eligible.

But the chaos and allegations of abuse that followed illustrates how, in the heated debate over the stimulus, even the most lauded program can turn into the most lampooned overnight.

Critics say the state bungled it when it put no restrictions on how the money could be used. It also deposited it into the debit accounts of food stamp and welfare recipients without telling them it was there or what it was for until days later.

Rumors percolated that the money had to be taken out and spent right away. And store clerks began complaining that people were using the money for beer, lottery tickets, iPods and flat-screen TVs.

"They said, 'Well, we have to get our money out of the ATM to buy school supplies,'" said Diane Goly, who owns a Sunoco gas station in Syracuse. "But as we were watching, people were taking the money to buy beer and cigarettes."

"They have a very difficult time not spending it on drugs," he said. "We were seeing people with drug abuse problems getting $1,000 in their bank account."

Monroe County Executive Maggie Brooks asked U.S. Attorney General Eric Holder to investigate the possible abuse of taxpayer dollars. Republican politicians railed against the lack of accountability and called it a rollback of welfare reform efforts of the mid-1990s. But the program's defenders said isolated cases have been overblown to stoke anger and play into the stereotype of welfare Cadillacs.

The Temporary Assistance for Needy Families program was created in 1997 to overhaul welfare and push recipients to find work rather than "living off the system." As a result, welfare rolls dropped from 12 million in 1996 to less than 4 million in 2008, even though there had been little change in the national poverty and jobless rates before the current recession.

When the economic stimulus bill was passed in February, it created a new $5 billion emergency fund under TANF to help states whose welfare caseloads have grown during the recession. But it also encouraged the expansion of rarely-used efforts that any state can take advantage of -- such as one-time cash payments to low-income families and temporary government-paid jobs programs similar to the Works Progress Administration of the Great Depression.

In Perry County, Tenn., where roughly one of every four workers had been unemployed since January, the state used $5 million to create jobs for those laid off from an auto parts plant -- clearing brush for the state highway department, painting murals, even baking turnovers at a pie factory. The county's jobless rate dropped from a high of 27 percent in January to 19 percent in July.

Los Angeles County used $160 million to put together a jobs program intent on employing 10,000 people. The stimulus is picking up 100 percent of the workers' salaries, because the state argued that additional costs to administer the program and supervise workers counts as the 20 percent.

Ken Wolfe, a spokesman for the U.S. Health and Human Services Department, said the agency expects more states to apply for the money. But Jack Tweedie, who's been studying the TANF program for the National Conference of State Legislatures, said most states will take only enough to ensure that they won't have to turn away new families who qualify for welfare. As much as $1 billion could be left on the table when the program ends in September 2010, he said.

"Virtually all the states are in really tough fiscal positions -- they've been cutting, not expanding," said Tweedie, director of the children and families program for the National Conference. "It's hard to get policymakers to focus on new things when primarily what they have to do is cut things."

Louisiana doesn't plan to use any of the funds, despite the fact that one in five residents lives in poverty -- the second highest in the nation. Sammy Guillory, deputy assistant secretary of Louisiana's Office of Family Support, said even with the stimulus picking up 80 percent, the state can't afford it.

"We're in an almost crisis level budget situation in Louisiana," he said. "We're facing budget cuts and staff reductions every day. So even to start a program is not an option right now."

Tweedie and other public policy experts have been traveling around the country educating states on the program's flexibility. The 20 percent portion doesn't have to come from state budgets, he said. It can be paid by cities, counties, private donors or nonprofits like homeless shelters or food banks.

"If they want to do back-to-school payments, go talk to Wal-Mart or Target and have them put up the 20 percent," Tweedie said.

Economist Lawrence Mishel said giving money to low-income people is one of the most effective ways to stimulate the economy, because they're more likely to spend it than average consumers.

"Whether you call it back-to-school money or just go-out-and-spend-it money, I don't think it really matters much," said Mishel, president of the Economic Policy Institute. "Why would somebody get upset about money going to people on TANF? As opposed to rich people buying flat-screen TVs" with tax cuts?

Like New York, Texas is using stimulus money to help poor families buy back-to-school supplies, albeit on a much smaller scale, just $6 million for the entire program. Welfare recipients got just $105 per child and they could use the money only at specific stores, not at ATMs.

Texas also announced its program weeks in advance, avoiding the confusion New Yorkers experienced when the money came their way.

Niurka Ventura, a mother of five in the Washington Heights section of Manhattan, said she heard about the money from a friend, who told her she had to withdraw the money by midnight. She noticed a crowd waiting at the ATM next to her apartment and sent her daughter to stand in line, which she said took three hours.

Ventura said she spent the money on phone and electricity bills, took her kids to the zoo and treated them to pizza. She said she didn't get the letter telling her that the money was for school supplies until a week later.

Kristin Proud, the state's deputy director for operations, said there was no other way to get the money out in time for back-to-school sales.

The state couldn't limit it to a certain number of stores, because rural residents might be an hour's drive from a major chain. It would have taken years to create a card system that could limit purchases to a list of items, as food-stamp cards are designed to do, she said.

"It would be very difficult to determine what kind of clothing, for example, is a back-to-school item," Proud said. "Like is a woman's size 12 -- is that OK for a purchase for back-to-school for children? Some would argue no. I would argue that I have friends who have large children who are 15 and wear clothing bigger than I do."

Proud said the federal government signed off on New York's plans. When asked about allegations that the money was being misspent, Wolfe, the Health and Human Services spokesman, referred ProPublica to remarks that an agency official made when the New York program was announced, praising the idea. Wolfe did not respond to the criticisms of how the program was implemented.

Don White, a spokesman for the Health and Human Services inspector general, said his office is aware of the New York allegations but wouldn't confirm or deny whether investigators were looking into them.

Mimi Corcoran, who works with George Soros' foundation, said Soros was happy with the outcome. He was inspired to donate the money by his own experience after World War II, she said, when Quakers gave him school money with no strings attached.

"We respect and honor that even if individuals are poor, they will spend the money appropriately for their children," she said

Outside the Washington Heights food stamps office two weeks ago, Tokina Julius, a single mother, said she didn't know how she would have afforded new clothes for her 7-year old daughter Jacqueline without the money. She said she bought four pairs of jeans and three shirts at Old Navy, as well as jumpers, stockings and a pair of Hush Puppies sneakers. She said she has $50 left, which she said she's saving for notebooks.

"I was happy it came," Julius said. "It really helped me out in a big way."