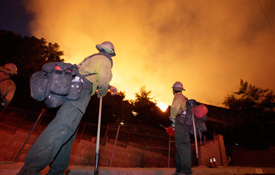 Despite hefty stimulus payouts to states, budget deficits remain a problem, reports Stateline.org. At this point, all but $1 billion of the $49 billion intended for states during this fiscal year has been paid out, but New York is still facing a $2 billion budget gap, and California’s looking at a potential $7 billion shortfall. The figures came from the latest GAO report, which we wrote about here.

As wildfires rage in the West, politicians there are angry that nearly $3 million in stimulus money targeted for fighting wildfires is being spent on park and watershed restoration in Washington, D.C., reports the Associated Press. “The last major fire in D.C. was likely lit by British troops in 1814,” Sen. John Barrasso, R-Wyo., told the AP.

As unemployment levels climb throughout the U.S., staffing levels in the federal government are swelling, reports USA Today. Fourteen federal agencies have used stimulus money to hire about 3,000 workers.