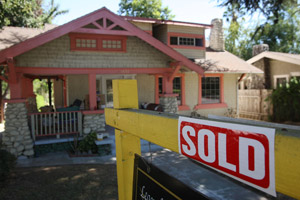 Apparently, you can never be too young to buy your first home. Under the first-time home-buyer credit, a part of the stimulus package, anyone who buys a home before Dec. 1, 2009, can get up to $8,000 back from the government, provided it's their principal residence and they haven't owned a home in the previous three years. (The program is an extension of a similar tax credit launched in 2008, which offered up to $7,500 to be repaid within 15 years.) But on Thursday, Rep. John Lewis, the chairman of the House Ways and Means Oversight Subcommittee, said there are "possibly hundreds of millions of dollars that have been paid to taxpayers who are not entitled to the credit," including children as young as 4.

In May, the IRS began using fraud filters to identify tax returns that may have improperly claimed the credit. But J. Russell George, the Inspector General for Tax Administration at the Treasury Department, told the subcommittee on Thursday that the IRS processed more than 1 million claims -- 70,000 of which George called "questionable" -- before the filters were put in place. Those claims totaled almost half a billion dollars.

George told the committee that his office looked at a random sample of those tax filers. What did they find? More than 580 taxpayers younger than 18, who had claimed almost $4 million in first-time homebuyer credits. The youngest of those tax filers was just 4 years old. Those claims were probably bogus, George added, saying that because "contract law generally exempts children under the age of 18 from being bound by the terms of a contract ... it is highly unlikely that these taxpayers would have entered into ARMs loans transactions for the purchase of a home."

Finally, George said that a number of those who seem to have claimed the credit inappropriately were -- wait for it -- employees of the IRS. He said those cases were referred to the Inspector General's Office of Investigations.

(You can read the Inspector General's report (PDF) on the problems with the credit.)

In other stimulus news ...

If you're waiting for a big economic boost from the stimulus package, don’t hold your breath. The White House's top economic forecaster said yesterday that the largest impact of the stimulus on economic growth is behind us, reports the Christian Science Monitor. Christina Romer, chair of the President's Council of Economic Advisers, testified before Congress that the stimulus' greatest impact on growth was predicted for the second and third quarters of 2009. "By mid-2010," she told Congress, "fiscal stimulus will likely be contributing little to growth."

In a continued dose of stimulus doom and gloom, the New York Times reports that state officials eager to win stimulus dollars are prioritizing shovel-ready -- but often less worthy -- projects. Small projects can get up and running quickly, while larger projects, which are more likely to have a lasting impact on the economy, are slow in getting off the ground. "These shovel-ready projects do a good job filling potholes, patching up the quilt," one expert told the Times. But, he added, "we have a monumental mess. There's no one with a vision, and there are so many systems that could completely collapse."