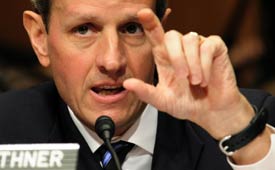 Top executives at banks that got money from the TARP will face stricter compensation limits thanks to the stimulus bill. That’s because tucked into the 1,071-page bill is a 12-page section that goes much further than any limits imposed by the Bush administration or even contemplated by the Obama administration.

The limits, which limit bonuses to one-third of total compensation for top execs, would affect both banks that have already received a piece of the $700 billion bailout and future investments. That’s far stricter than previous limits. For example, the limits proposed last week by Treasury Secretary Tim Geithner wouldn’t have applied at all to the Treasury’s ongoing program to invest in "healthy" banks across the country.

The new limits will force "huge change" at the country’s larger banks – albeit "temporarily" – said Paul Hodgson of the Corporate Library, a corporate-governance research firm. The limits will apply until a bank pays back the government’s bailout money.

The bill requires Secretary Geithner to set new pay limits for participants in the bailout. It also spells out what some of those limits must be:

For those banks that received more than $500 million from the government, the rules affect the five most senior executives and the twenty "next most highly-compensated employees." Banks that got between $250 million and $500 million only limit the pay of the five most senior execs and ten next highly paid, and so on down to the smallest banks, those that got less than $25 million, where only the highest paid employee is affected.

The limits will be felt by execs at the country’s national and regional banks, said Hodgson, of Corporate Library, the corporate-governance research firm. Bonuses at the biggest banks have run at 20 to 30 times an exec’s base pay, he said, and two to four times salary for regional banks.

The limits don’t directly limit executive salaries, only bonuses – but it does put in place some indirect measures to control them. The bill requires that each bank that received more than $25 million create a Board Compensation Committee composed of "independent directors" to review compensation plans. And public companies have to put their compensation arrangements up for nonbinding shareholder votes.

It’s unclear whether the bill will affect bonuses already paid for 2008. On the one hand, it explicitly exempts bonuses paid pursuant to contracts written or executed by Wednesday of this week. On the other hand, it directs Secretary Geithner to review bonuses already paid out to see if they conform to the bill’s requirements: If not, Geithner is directed to "negotiate" with the bank "for appropriate reimbursements to the Federal Government." We’ve put out a call to Sen. Chris Dodd’s (D-CT) office to see if he can unravel this for us (the bill’s language seems to largely derive from an amendment he offered in the Senate).

The stimulus bill passed the House earlier today and should get a vote in the Senate today.