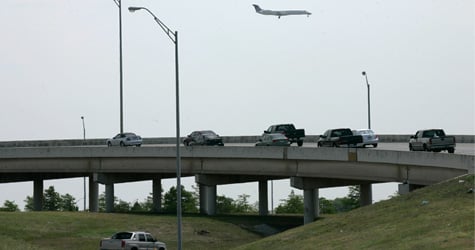 More than 1,900 companies or branches of companies have been awarded stimulus transportation contracts around the country, with many more projects yet to be awarded.

We wanted to see who the big winners were so far, so we obtained two databases from the U.S. Department of Transportation. First, we received an updated copy of the national database of stimulus road and bridge projects. We also obtained data that states filed as part of the Recovery Act reporting requirements that show which contractors have been awarded particular projects.

The priciest project so far, according to the DOT data, is the expansion of State Highways 114 and 121 in the Dallas-Fort Worth area. The contractor for the $250 million project is NorthGate Constructors, a joint venture of Fort Worth-based Kiewit Texas Construction and San Antonio-based Zachry Construction Corporation.

In California, Kiewit Pacific won the $190 million contract to expand I-405 for a commuter lane in Los Angeles County. Kiewit Pacific and Kiewit Texas Construction are both subsidiaries of Kiewit.

Want to know who's benefiting the most from stimulus transportation projects in your area? Search our database by state, county or congressional district. Just keep in mind that some projects go beyond one county. For example, Albany-based Callanan Industries won a contract to repave "various federal aid highways" in New York state. In other parts of the country, contractors are painting bridges or roads statewide. In those cases, we couldn't narrow it to one county. But we could trace more than 90 percent of the money to the county level.

We have a few other caveats we want you to know about. The DOT project database and the state recovery filings do not always match one-to-one. For one thing, total obligated spending linked to specific contractors is about $13 billion. Spending attached to projects is a bigger amount -- $19 billion.

We also found many cases where projects had no contractor assigned and a few where states listed a project that was not on the DOT list. There also are several cases where a project might involve multiple contractors. Also, some state reports included duplicate contracts. We've done our best to eliminate those duplicates. If you see anything in the data that needs to be updated, please let us know.

We’ll be digging into this data further and hope you will too, so we've provided some tips for backgrounding companies and projects.