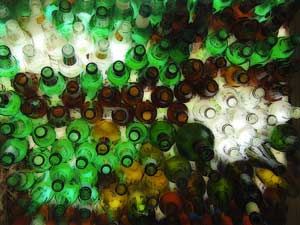 The stimulus package will buy, among other things, new skylights for a state-run liquor warehouse in Helena, Mont., ground zero for all adult-beverage distribution in Big Sky Country. Still, think twice before sounding the pork alarm.

Now that spending transparency Web sites are lighting up, state by state, around the country, we’re beginning to learn the specific destinations of the many billions of dollars the stimulus package will distribute to the states for projects ranging from highways and bridges to parks and, well, booze storage. But putting names to the abstract initiatives, like investing in infrastructure and renewable energy, proves awkward at times.

Some projects will winnow stimulus dollars for such mundane investments as the resurfacing of a stretch of U.S. Route 64 in North Carolina. But others, such as the new vinyl walls proposed for state-owned restrooms in Rose Lodge, Ore., (pop. 1708) seem, at first glance, a touch absurd.

Projects like Montana’s liquor warehouse could provide fodder for stimulus critics, but it’s actually just a continuation of a twenty-year-old program designed to save the state money by reducing energy consumption.

"If light can be reflected in through the windows, we save money," Steven Swanson, the distilled spirits manager at the warehouse, told us. The state of Montana has been in the liquor distribution business since prohibition ended, and brought in about $100 million last year. The warehouse is just one of the many state-owned buildings in line for cost-saving energy improvements.

Montana’s Gov. Brian Schweitzer has launched an initiative to cut the state government’s energy use by 20 percent before next year. To achieve that "20X10" goal, the state hastened "audits" to plan and design energy-saving renovation in older buildings, like the 30-year-old liquor warehouse, throughout 2008, creating a backlog of projects that were simply awaiting funding, Paul Cartwright, the governor’s adviser on energy issues told us.

Last fall, Schweitzer, a Democrat, proposed a budget that included about $25 million to pay for renovations. But, as the financial crisis deepened that figure was repeatedly down-sized in the administration’s proposals to the state legislature. That is, until the stimulus package arrived on the doorstep.

Schweitzer has "asked us to look at projects that we would have completed but for the recession," said Cartwright, the governor’s aide, who is also a Helena city commissioner, said. "We’ve got a large pile of buildings that are engineered and ready to go to bid."

Montana expects to receive about $27.7 million from the State Energy Program’s$3.1 billion slice of the stimulus pie. Of that, officials predict that a familiar number, about $25 million, will fund the governor’s energy-saving program, including those ready-to-go projects. The state’s list of projects, published on the Montana recovery Web site last week, includes ventures ranging from the skylights to energy-saving doors and windows at West Yellowstone Airport, to a brand new biomass boiler at the Montana state prison.

It may not be a coincidence that energy conservation programs, like Montana’s, found a home in the stimulus bill. Montana’s conservation projects were already on the radar of the stimulus’ drafters by Inauguration Day. Schweitzer, who gave a prime-time performance at the Democratic National Convention in August, was tapped by then-President-elect Obama and his chief-of-staff, Rahm Emanuel, to give energy-saving advice during the transition, Montana officials told us.

During a meeting, Schweitzer and Obama discussed the possibility of including energy conservation programs in the stimulus package which was already being conceived, said Louise Moore, a senior official in Montana’s Department of Environmental Quality.

"Gov. Schwietzer was really touting the [energy] program, and they looked at where that would fit within the energy programs," she said. "It really fits in [the Department of Energy’s] state energy allocation." That money survived the bill’s long trek through Congress.

The Obama administration isn’t the only set that’s fond of Montana’s energy conservation program. Republican state legislators, who make up the majority, have also supported the program, and the politicos we spoke to weren’t inclined to make levitation trains or salt marsh mice out of the liquor warehouse’s newest amenity.

"The energy conservation, that’s fine. That’s an infrastructure issue, with buildings, and some downstream cost savings as well," Jerry Black, the state senate’s Republican whip, told us. "When you look backwards, you say, we didn’t do enough, we probably should have done more."