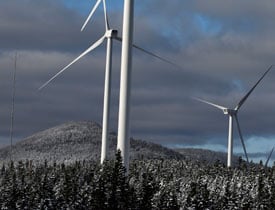 The wind power industry is doing better than expected this year, thanks in part to the stimulus package, reportsThe Wall Street Journal’s Keith Johnson. Despite the recession, the U.S. has installed 5,800 megawatts of wind power this year, a 38 percent increase over the same period last year, writes Johnson. The industry expects performance to decrease in the fourth quarter, however, and is asking Washington for “a firm, long-term national commitment to renewable energy.”

After the first batch of reports from stimulus recipients were posted on Recovery.gov last week, a coalition of nonprofit groups called on the Obama administration to fix the way it tracks and reports stimulus jobs. The groups—OMB Watch, Good Jobs First and the Economic Policy Institute—want the administration to do more to catch “obvious data errors,” make it easier to download data and allow stimulus recipients to distinguish between projects under way and those still in the planning stage.

These organizations add that many of the projects reported last week fall into the latter category, “creating an artificially low job creation total.” That’s an important caveat to add to our post from last week, in which we divided the amount of money covered by the reports by the number of jobs reported. A more accurate way to calculate the cost per job would be to focus on only the contracts that are under way—a calculation that reporters and watchdogs will be able to make if the administration agrees to the reporting changes urged by these groups.

Meanwhile, in Canada, distribution of stimulus money may depend on party affiliation, AHN reports. Conservatives hold 46 percent of the seats in the country’s House of Commons, yet the party’s ridings received 23 percent more projects in the 1 million Canadian dollars and up range than the Liberals. And what are they spending it on? According the Liberal Party: doorknobs.