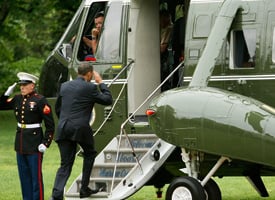 President Obama will appear at Nellis Air Force Base in Nevada this afternoon to mark the stimulus package's first 100 days.

So how is the stimulus working? A few measures:

We're likely to hear a new figure for how much of the $787 billion has made it into the pockets of American workers. According to data on Recovery.gov, that number is $31.1 billion. But that doesn't include tax cuts. A story in the New York Times on May 12 puts the total at $45.6 billion.

The bulk of the money so far has come in the form of a middle-class tax break, increased unemployment benefits and food stamps, and federal assistance to prevent cuts in Medicaid. The infrastructure projects that many people imagine are only just beginning, with 545 under way as of the end of April, according to the House Transportation and Infrastructure Committee. A total of $116 billion, about 15 percent of the plan, has been "obligated." That is defined as money made available to state and local governments or committed to a specific project.

We're also likely to hear that the stimulus package has created or saved more than 150,000 jobs and will create or save another 600,000 jobs by August. These estimates are based on economic models by the president's Council of Economic Advisers. So how many jobs have really been created? As my colleague Olga Pierce has noted, the world may never know.

As of April 30, the transportation and infrastructure projects have created or saved 7,700 jobs, according to a recent congressional report. But the main source of jobs so far has probably come in layoffs averted. For example, the stimulus package enabled Virginia to prevent cutting 13,000 school janitors, secretaries and other administrative employees, according to a report released yesterday by the Center on Budget and Policy Priorities. The liberal-leaning think tank concludes that federal aid to states has closed roughly 30 percent to 40 percent of state budget gaps.

But CNN reports that one of the earliest stimulus achievements -- the rescue of 25 Columbus, Ohio, police recruits who were about to be laid off -- is in peril. Those same recruits could lose their jobs at the end of the year if city voters don't pass a tax hike.

One more indicator: Dow Jones announced today that it has created an economic stimulus index composed of 50 construction, alternative energy and telecom stocks expected to benefit from the recovery act. As of yesterday's close, the index was up 1.62 percent since the start of the year.