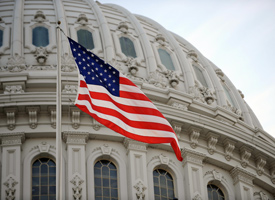 The construction industry's biggest trade organization blasted provisions in the stimulus plan that require contractors to certify that their projects are built with U.S.-produced iron, steel and other materials.

“Certain key water and wastewater equipment is available only from foreign suppliers. Other items come from a single U.S. source. In some cases, contractors cannot get a certification as whether all of the components of a piece of installed equipment are U.S.-made. These problems have reportedly held up some project awards and led other water and sewer agencies to forgo stimulus money altogether. In addition, Canadian municipalities have threatened to retaliate against cities that use Buy American to keep out Canadian-made items. This step could escalate to a full-blown trade war that would lose jobs for contractors and many other businesses."

In a conference call arranged by the trade group last week, Mike Welch of BRB Contractors cited the example of a wastewater project it was doing in Topeka. Before the stimulus, the plan was to include a co-generation unit that would take methane from the wastewater and produce electricity for the plant, to cut down on the carbon footprint.

But the $2 million unit is made in Austria; buying one from a U.S. manufacturer would cost 30 percent more, he said.

“We’re having problems getting any of the people up the line of command to make a decision on whether or not this is OK for us to go ahead and buy this thing,” Welch said.

Here's the latest newsfeed on the "Buy American" provision. For background on what prompted the organization to act today, check out BusinessWeek's "Joint U.S.-Canadian Protest of Buy American."