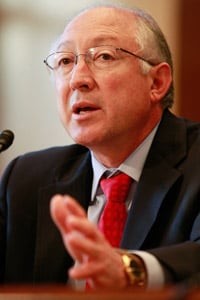 Interior Secretary Ken Salazar has changed the procedures the Bureau of Land Management must follow before leasing federal land for oil and gas drilling, sending a message that the Department of the Interior aims to reverse some energy policies of the Bush administration.

"The previous Administration's 'anywhere, anyhow' policy on oil and gas development ran afoul of communities, carved up the landscape, and fueled costly conflicts that created uncertainty for investors and industry," Salazar said in a news release. The BLM, which is part of the Department of the Interior, regulates oil and gas on the 256 million acres of federal land it manages.

The reformed policy, which Salazar announced earlier today, will require more detailed reviews before leases are issued, will allow for more public involvement in developing master leasing and development plans, and will shift the focus of new drilling toward areas already being developed. The reforms also create an Energy Reform Team to identify and implement the reforms.

In the past, BLM has used categorical exclusions to approve leases, allowing leases to be rubber-stamped based on existing environmental analysis rather than relying on new reviews. Based on today's announcement, BLM will no longer be allowed to use those exclusions in cases of "extraordinary circumstances" -- meaning drilling that could impact protected species, historic or cultural resources, or human health and safety.

"Restoring balance to an agency that was out of whack for years is a good move," said Amy Mall, a senior policy analyst with the Natural Resources Defense Council. "It means [the BLM is] not just going to lease a parcel because the industry wants it."

She added that while the announcement is a positive one, it remains to be seen whether the reforms will be adequately implemented.

The Department of Interior has created a side-by-side analysis (PDF) of current BLM policy and the proposed reform, and has posted a fact sheet (PDF) on the changes.