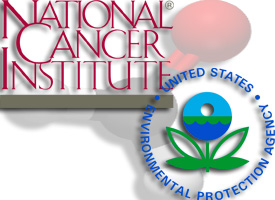 A study released last week by the National Cancer Institute strengthens the link between exposure to formaldehyde and several forms of cancer, including leukemia. The 30-year study, which tracked the health of nearly 25,000 men exposed to the chemical in industrial plants, is likely to impact a long-awaited Environmental Protection Agency risk assessment of formaldehyde.

Last year we reported on how FEMA trailers used by Hurricane Katrina victims were contaminated by formaldehyde, causing severe respiratory ailments. At the time, FEMA defended its use of the trailers by pointing to a lack of formal rules governing the chemical's use in wood and particle board.

Now the EPA is developing those rules, and it will probably use its formaldehyde risk assessment to determine an appropriate safety standard.

But the risk assessment has long been sidetracked by the cancer study and the politics around it. The assessment was scheduled to come out in 2004, until Sen. James Inhofe, then chairman of the Environment and Public Works Committee, wrote a letter (PDF) to Michael Leavitt, the EPA administrator at the time, persuading him to delay the assessment until the NCI released its study.

At the time, the NCI had just published preliminary findings suggesting a link between formaldehyde and leukemia. Inhofe, recognizing that the findings would influence the EPA's formaldehyde assessment, argued that the cancer study wasn't strong enough, saying it needed to "collect a more robust set of data." (He pointed out that the researchers couldn't explain exactly how formaldehyde could cause leukemia.)

NCI officials told Inhofe that the second round of findings would take about 18 months.

Five years later, the "more robust set of data" is out, and the NCI's latest round reinforces its previous findings.

Inhofe's office did not respond to a phone message requesting comment on the study.

We asked the EPA how the NCI's latest findings would impact the completion of the formaldehyde assessment. In an e-mailed statement, an EPA spokesperson told us that the agency was reviewing the NCI study but still didn't know when the risk assessment would be completed. The agency began working on it in 1997.

Formaldehyde is one of dozens of chemicals sitting in a backlog awaiting final EPA risk assessment through the agency's Integrated Risk Information System. These assessments are used as the country's gold standard for how dangerous a chemical can be to human health. The federal government and local and state governments reference them when determining whether and how to regulate a chemical.

In April 2008, the Bush administration announced a change in the assessment process that would allow the White House and other federal agencies greater influence in the scientific research, a policy that was criticized by environmentalists.

Back when the EPA delayed its formaldehyde assessment in 2004, the agency was working on a different formaldehyde rule -- this one addressing emissions from industrial facilities.

Instead of using the EPA's current formaldehyde science, agency officials relied on "risk information developed by an industry-funded organization" called the Chemical Industry Institute of Toxicology, according to a 2008 report from the Government Accountability Office.

The industry-backed risk estimate said that formaldehyde was 2,400 times less potent than the original EPA risk assessment. According to the GAO, the industry estimate also helped "exempt certain facilities with formaldehyde emissions from the national emissions standard."

The rule was eventually struck down in court after being challenged in a lawsuit by the Natural Resources Defense Council.

Now the Formaldehyde Council, an industry trade group that represents chemical manufacturers, is pushing for further delay. In a statement about the NCI study, it said that the health effects of formaldehyde need to be reviewed by the National Academy of Sciences.